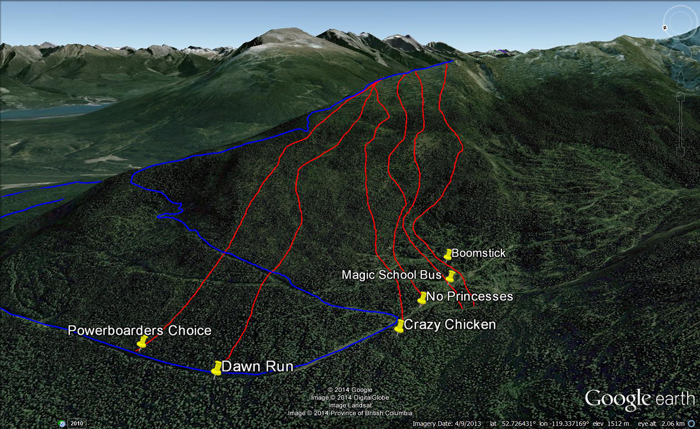 The six runs on Crystal Ridge, a unique sled-assisted ski area west of Valemount and the first of its kind in North America, have been named – each with a story related to some of the people involved in the project.

The privilege of naming the first run was given to members of the original Powerboarders Association who first started using snowmobiles to access prime snowboarding terrain on the ridge – an activity they called “powerboarding.” Trevor Pelletier, one of the original members, says they chose “Powerboarder’s Choice” to keep the name of the association alive, and it is one of the original trails they used – he says it’s the best one. There were between 15-20 members of the original association, which staked a claim in the area for powerboarding in the Sustainable Resource Management Plan for the area from Horsey Creek to Blue River. Pelletier says the original committee sort of faded away after the mill closed, but he credits Arnold Wied, who was on the original committee, with keeping the idea alive through the Valemount Area Recreation Development Association, of which Wied is also a member.

VARDA has taken on the task of developing and promoting sled-assisted skiing on Crystal Ridge. The association received $45,000 in 2013 from Columbia Basin Trust’s Community Initiatives and Affected Areas Program, which went toward maintenance and brushing of the access route, and cutting the last two of the six currently planned runs.
The Source Tree Service won the tender for the work, and has cut all six of the runs, so owner Brendan Taylor and his crew have spent a lot of time working on them, and had come up with some of their own names. If you looked up “Boomstick” online, you might find references to sawed-off shotguns or giant hotdogs at major league baseball stadiums, but it’s actually a reference to large logs that are chained together to form a boom – a way to corral and move logs on water (and also to protect marinas from floating debris). Taylor says they had another job cutting logs to be used as boomsticks at the same time as they were working on that trail. It happened to be his first experience harvesting boomsticks, so the name stuck.

While working on another trail, they had some interesting experiences with wildlife.

“The grouse had just had their chicks, and when we were putting our gear on and getting ready at the quads, the grouse were dive-bombing out of the trees and mock-attacking us,” says Taylor. He says grouse are really protective, quite aggressive, and they’d be hissing at them while they were on their quads, so they had an ongoing joke about the “Crazy Chickens.”

Curtis Pawliuk, manager of VARDA, says Dawn Run is a reference to someone who lives near the bottom of the trail, and the other two trail names – No Princesses and Magic School Bus – are inside jokes about some of the kids of VARDA members.

VARDA was also approved for funding through the same Columbia Basin Trust program again this year, for $16,000 for improvements to the access route (including ditching and installing culverts so it is more easily maintainable over time), building an outhouse, removing some hazard trees and installing signage and mapping for the area. Pawliuk says the plan is to be able to charge a minimal fee for access to the area, which would go towards ongoing maintenance and development, alleviating the need for further operational funding from outside sources.