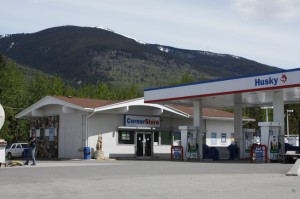 Const. Pete Berndsen of the McBride RCMP says two suspects were observed on video surveillance at 1:25 in the morning. Their faces were concealed by balaclavas. They appeared to be looking at the ceiling. They then went into the back of store where there is no video surveillance. At that point, they disconnected the video surveillance system, which was not being monitored at the time.

The culprits also managed to cut the phone lines on top of the roof, which is not easy to access, Berndsen says.

“I’m not sure how they gained access there,” he says. “They must have brought a ladder with them.”

By cutting the phone lines, they disabled the alarm system, which was without a backup.

“They knew what they were doing,” Berndsen adds.

The suspects took cigarettes and an undetermined amount of cash. Berndsen says it’s unclear how long they stayed in the Husky, but they remained long enough to smoke some cigarettes.

The RCMP was first alerted at 4:30 am, when the first Husky attendant showed up for work.

Gas stations in Blue River and Clearwater were attacked in a similar way, over the course of the past month. Both instances involved cutting the phone lines on the roof, the suspects smoking cigarettes and attacking the safe. All the gas stations were closed for the night when the attacks occurred.

Berndsen says the McBride Husky was back in operation by 11am, thanks to the local electrician and Telus rep.

There was some damaged to the backdoor where the suspects broke in. Berndsen says it’s difficult to say the total damage to the store.

He doesn’t recall anything like this in his 11 years living in McBride.

“We don’t get a lot, but for small towns it’s difficult,” he says. “It’s the feeling of violation – that someone has been in your business or residence. People work hard and then people come and take it all away.”

The store owner declined to comment. The McBride RCMP detachment is continuing the investigation.

Berndsen advises store owners to ensure their security system has a backup.