The Thompson Nicola Regional District has long standing rules in place that prevent rural landowners from living full time in recreational vehicles on their property. It’s no different from long standing rules that apply in rural places in the Robson and Canoe Valleys and it’s reminiscent of the struggle of some local folks attempting to live in tiny homes here. The story seems to be that residents are only finding out about these rules now; if that’s the case, it’s a terrible blunder by the Thompson Nicola Regional District. In order for rules to be followed, they need to be known.

It’s also completely possible that people just do what they do, have never asked if it’s legal and no one has complained and thus the offenders have never found out about the rule. I’m not judging, it’s just a plausible explanation.

The dispute that seemed to get its start just outside Clearwater ‘feels’ like it underscores a much deeper problem: while many folks have land, they don’t have the means to build a home on it.

If this is the case, there’s a pretty reasonable path forward, a path that for many years helped house people in this region: affordable mortgages. It gives rural property owners a hand up, it grows the tax base and builds much needed housing stock. It’s kind of a win-win solution. 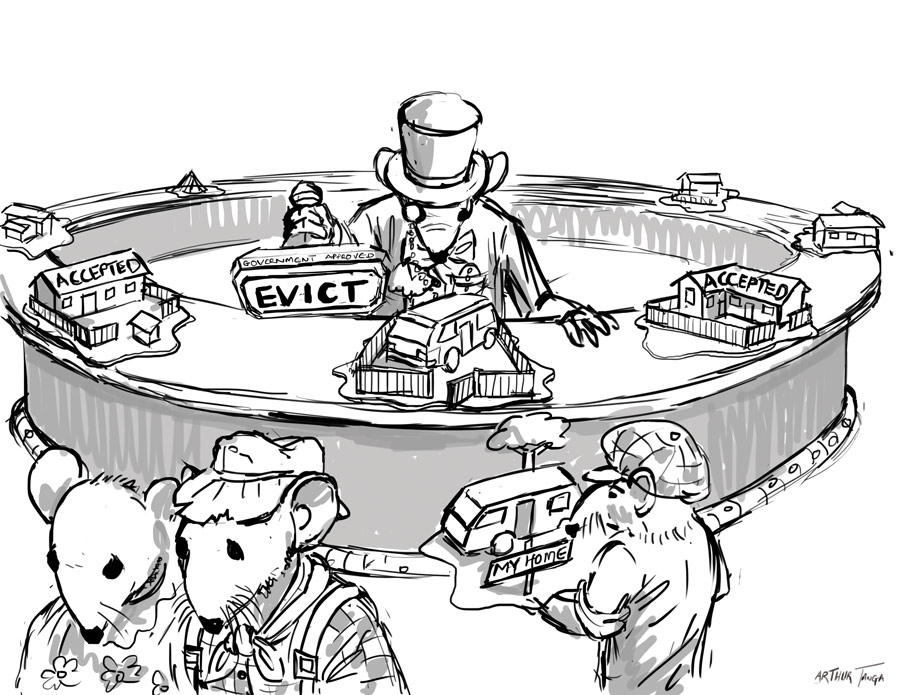 But there are some other elements at play here… I wonder to what extent this conflagration between the Thompson Nicola Regional District and rural landowners accurately portrays a growing rural/urban class divide, a slow slide into poverty for rural people. If it’s true for you, I want to tell you that I am interested in your story and I’d love to get a call or a letter from you.

I had a great time talking with one of the leaders of the movement Tom Coles, who sees this as really big issue. One of the elements Coles teases out is how a bureaucracy located in a city is making rules for poor rural folk. This is a pretty good description of most regional districts including our own. How good local decisions are made as far as 300 kilometres away in an NBA-size board room in our province’s ‘northern capital,’ where bureaucrats, mayors and city folk outnumber rural reps two to one is kind of an ongoing mystery to me.

Personally I’m glad to hear from the Thompson Nicola RV Rights group, I’m glad that neighbours are standing up for neighbours against what they see as arbitrary and harmful rules. In my mind all government needs pushback pretty much all the time, not because what they are doing is always wrong, but because they are making rules for all of us and those rules should be tested in fire.

As for the rural folk sliding into poverty… Is this becoming more common? Certainly in the case of homesteader Angie Smith, profiled briefly in our story this week, it seems not to be a slide into grinding poverty that is causing the issues, but rather a good strong grasp towards a lofty and really universally heralded goal: the homestead. I say right on Angie Smith, I hope the TNRD is wise enough to let you succeed, because homesteaders staking out a piece of heaven, piglets and all are just what we need at the moment. Food security, self determination, this is good stuff. But I’m also going to say that as the poster child for the cause of poor rural folk backsliding into poverty… well Angie Smith doesn’t fit the bill.

From a distance the move to ban RVs seems like a callous attack on the poor. A just and decent society would try to support people where they are at. I tend to agree with Coles here. The TNRD has thought long and hard about the manifold negative download implications of having RVs as permanent residences, they would do well to have those able bureaucrats study the implications of evicting residents who are just trying to get by.