If you are an artist and you think the Valemount Arts and Cultural Society’s Big Foot sculpture is the least attractive, imaginatively bankrupt, poorly conceived, idiotic waste of taxpayer money, you should please, please, please ask council to reverse their decision. I’ll give you 5 reasons and something to think about.

Even so, I believe you should support it. 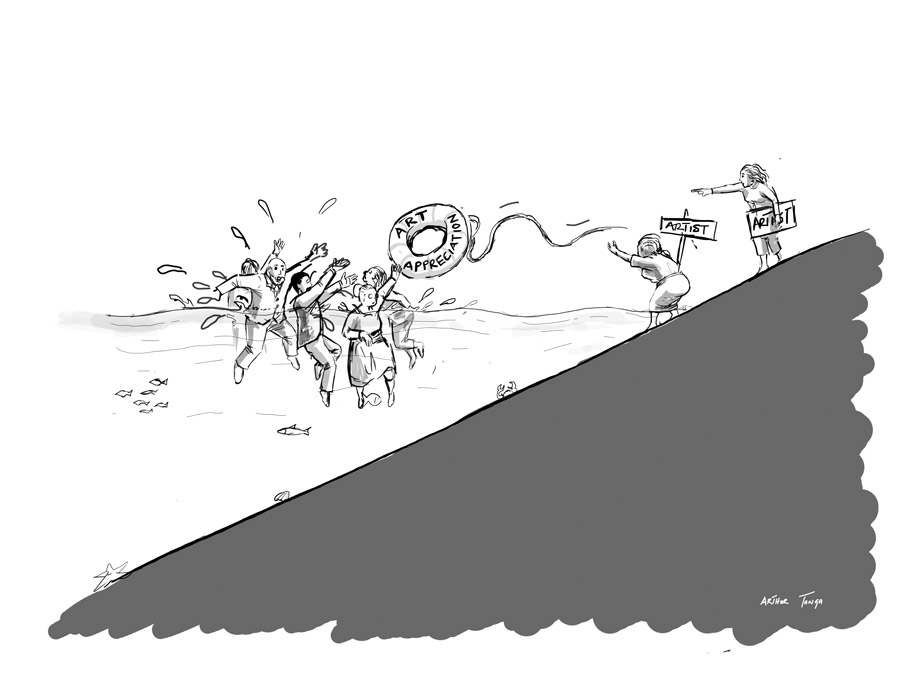 1. Public art that is not controversial is just decorative. Public art inspires conversation and all types of wonder. Even if wonder is just the kind of wonder that forms the first word of the acronym WTF. This piece has already got you talking about it; it’s a good start.

2. Artists should occasionally be paid. Do you remember the last time $10,000 made its way directly into a Valemount-based artist’s pocket for a single piece? Artists do a lot for our community. Back when I was in a band, my pals and I would play free shows all the time. When you carry a massive inferiority complex around it’s actually safer not to get paid for gigs. But recently one great local band decided to stop playing for free every time they were asked. The reason was pretty simple. Because gear costs money, because guitar strings cost money, because hauling gear around is work, because gas to get to the venue costs money. One show won’t wreck your stuff, but hauling gear around time after time, I have found, does.

3. The money is there. In this case it is a grant from the Columbia Basin Trust. It’s a pot of money specifically dedicated to public art. In my mind funding the arts could help our community bloom in yet unimagined ways. This money can be used to allow artists to work in their field with a decent return. It enriches them and by extension the village. When council nixed this proposal they essentially said we’d rather throw that money out the door than entertain this artwork that they and the people they consulted don’t like. For arts sake, let it go! It may have a charm and an appeal that is difficult to see in two dimensions.

4. Art by committee? That is treason. Some people have said they would support this project if there was better consultation. Shortly thereafter they acknowledge that art by committee is doomed to be terrible. You can’t have it both ways. Which one is it?

5. The giant foot has been vetted by people who know about art and care about the town. The Valemount Arts and Cultural Society put out a public call for ideas and chose this piece and deemed it to be of value. Council, by nixing the proposal is saying that they don’t trust the arts society. It’s not a good road to start down. What exactly is council’s pedigree in art? Are they better at this than the society? Can we get a tour of their homes and make sure they know what they are talking about?

7. Many will disagree with this point, but it’s clear to me that Valemount has got to where it is today because it has been open to all sorts of ideas. Many of those ideas are ephemeral. We were open to a major new ski resort, geothermal power, open to a bike park, open to a brewery and open to a Big Foot Trail. These may not seem like much, but entertaining new food, new cultures, new ideas and new art sends a really loud signal to others: this is a cool town. Conversely, saying, ‘this doesn’t fit.’ That sends a really negative signal. I’ll contend this is why the Rainbow Crosswalk is going to be such a massive game changer here.

8. Art breeds art. A lot of time and treasure has been spent bringing the big big foot to this point. What council is doing is creating an atmosphere of rejection. If this small (albeit big for a foot) proposal goes forward, there is no telling what the next project could be. After all, the funding is for up to $30,000. By killing this in the crib, we lose out on the next piece of art, possibly one that many people will be crazy about.

9. Watching the council meeting it’s clear that council is bumbling through this, even though they set up a policy just to be eligible for this grant. Tabling this proposal is a huge overreach in my estimation.

The most important reason you should say please please please for council to bring this back and approve it is because, at heart, you are an artist. Artists deserve to be seen and heard. They deserve freedom of expression. In a world that does so little for artists we should be supporting our brothers and sisters in the arts community. You may not get it right away, or ever, but that’s okay; it’s just the first piece.