“You should see the Premiers.”

Those were the words Carman Smith exclaimed to his buddies when they were UBC students in 1959. And so, they took a week off from summer work and climbed and made some first ascents in the mountains west of Valemount, BC. Their climbs that summer and from 1960 are recorded in the Alpine Club of Canada and Varsity Outdoor Club Journals of 1959/60/61.

Sixty years later, Dennis Holden, of Castlegar, Dave Kennedy of Vernon, Bob McFarlane of North Vancouver and Carman Smith of Barriere have just returned from revisiting the Premier Range on Aug 9, 2019. All in their early 80s, they went by helicopter instead of hiking in from the train tracks at Tete Jaune. They dug out some of their old climbing gear– hats, ropes, climbing pants, carabiners and ice axes for photos– and marvelled that they knew exactly where they were. Carman’s son Bob accompanied them as photographer and the weather was perfect.

They landed on the glacier below the mountain peak and when the pilot later flew around the peak they could not believe they had actually all stood on the peak together on July 2nd, 1959. It is a much more dangerous area now, as the ice and snow have receded and the crevasses are much larger. The rock appears treacherous when not held together by snow and ice. To their knowledge, the peak is not named and there will be a follow up to this story.

Back in Valemount the group met their wives at the heli pad;

one could see they were absolutely elated to be able to visit the magnificent area again, especially in one hour instead of 7 days. The pilot from Yellowhead Helicopters was excellent and perhaps quite impressed by these “seniors” who had climbed before he was born.

To this date the four remain close friends, along with the many Varsity Outdoor Club members of the 50’s and 60’s who worked, skied, hiked and climbed in the marvellous mountains of British Columbia. 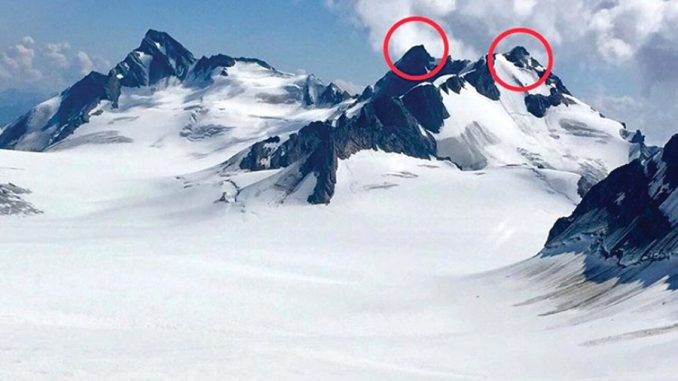