The Valemount and Area Recreation Development Association (VARDA) received a national award for its work promoting the snowmobile industry and it’s work on the Valemount Bike Park and Crystal Ridge, a snowmobile assisted ski area. 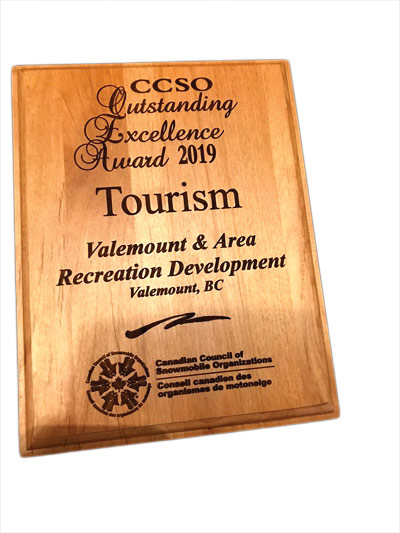 The award came from the Canadian Council of Snowmobile Organizations and was presented at the 51st  International Snowmobile Congress in Michigan.

VARDA Manager Curtis Pawliuk said that the recognition is amazing.

“I think we’re promoting snowmobiling in the right way. It got noticed for us,” he said.

Pawliuk said VARDA has a keen focus on snowmobiler safety and land stewardship.

He said VARDA is able to do great things because of their relationship with sponsors and support from industry, including Canadian Mountain Holidays, a local heliski company.

“We couldn’t be as active as we are without support from industry,” he said.

He said VARDA doesn’t receive any funding for its operations from government.

“Local businesses, the accommodation sector, the food and beverage sector contribute, as well as major dealerships Edmonton and west,” he said.

Pawliuk said snowmobile dealerships have been integral partners and they have a symbiotic relationship: their support helps VARDA maintain trails and create great experiences for snowmobilers and their support gets them noticed.

This past winter was not ideal for the sector, VARDA sold 2000 less trail passes compared to the previous year. The number of trail passes sold per winter can vary from 13,000 per year to 19,000.

Pawliuk said it’s difficult to forecast what the next winter will bring, but said VARDA has done a good job of managing expenses when usage is lower.

The CCSO had rave reviews of VARDA’s work in a press release about the award:

“They have contributed significantly to growing snowmobiling in the Valemount area and also increased tourism for the community through the creation and management of a mountain bike park and snowmobile-assisted ski area. Valemount is now more than a point on a map; it is a year-round tourist destination.”

a point on a map, it is a year-round tourist destination.”