The McBride Canada Day activities on Sunday celebrated not only our beautiful country, but also community volunteers. After the face painting, tug of war and kids games, everyone gathered around to listen to the singing of O Canada by the kids and youth at the park, and then some time was given to recognize community volunteers. Two Cheryl Sansom Bells were given out to honour the Volunteers of the Year. The award was created in honour of Sheryl Sansom, a prominent and dear community volunteer. Two recipients were chosen this year, Dawna Hickerty and Pete Amyoony. As well, each volunteer that was nominated for the award also received a certificate of recognition and a commemorative coin.

Afterwards, the winners of the Canada Day Cake Bake Off was announced: 1st Place went to Donna Hickerty, 2nd Place went to Tanya Rich, and 3rd Place went to Jennifer Wellwood. All entrants received “Chamber Bucks” from the McBride Chamber. Then the cakes were divvied up and served. Len Downing, who also received volunteer recognition, was at the park continuing in his community service having volunteered as one of the judges for the cake contest. He helped serve cake after the contest.

Where do we begin? Before there was a Recreation Centre, Dawna started the figure skating club at an outdoor skating rink, often shovelling snow in the early morning. She was active in McBride Minor Hockey for many years and supported the players as a driver and helper during many road trips, tournaments and practices. During more than 40 years as a member of the McBride community, Dawna has been an active volunteer at many organizations and events and has been an integral member of the Royal Purple; holding positions of Honoured Royal Lady, Secretary, Treasurer, Social Convenor and catering manager. If you have eaten delicious food at a community event, Dawna has probably had a hand in making it. Dawna is active in the Old Age Pensioners Association, where she has organised the annual Christmas Dinner, plans outings and events and volunteers her considerable talents in various executive positions. She is also an active member of the Valley Piecemakers; helping newcomers, and donating quilts for seniors, and new babies.

Many people know Pete through “Pete’s List” a weekly email fan-out which shares information about local events, connects people looking for rides, and sale items – but there is so much more! Pete is well known in the Robson Valley for his work with the Canoe Robson Education Development Association, has taught ballroom dancing and Tai Chi and is a musician of note. A long time resident of Dunster, Pete organizes the annual Dunster Christmas concert and Farmers Market. He is an avid gardener, sharing knowledge in a weekly gardening column in the local paper, a proponent of heritage seeds and seed saving and a strong supporter of the Open Gate Garden. Pete is a member of the Robson Health Association and still volunteers for dishwashing and cleanup at community events. Pete was a regular guest speaker on Trevor Fry’s late night radio show on BBC, sharing information on Dunster and the Robson Valley to popular acclaim in the UK. He is a past Regional District Director and continues to advocate for the Robson Valley wherever he goes. 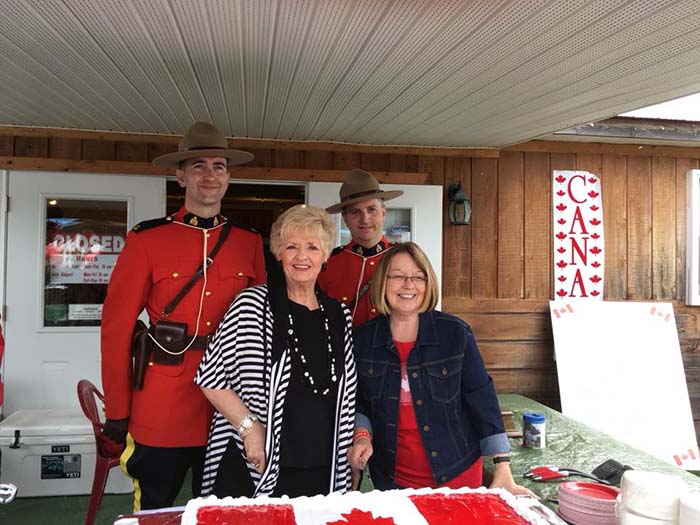