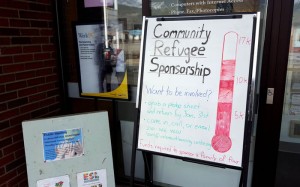 Valemount has met its match.

The Valemount Learning Centre and community refugee sponsorship project have been matched with a refugee family from Syria, according to Jared Smith, ESL and Literacy Coordinator.

Although VLC’s plan was initially a family of four, Smith says the family dynamic has changed.

“The family consists of a young couple, 25- and 26-years-old, and one child, eight-months-old,” says Smith via email.

“They are currently in Turkey, and cannot return to Syria for the fear of violence and persecution,” he says.

VLC is currently working on the application forms, and Smith says the family could arrive in Valemount any time in the next four to 12 weeks.

VLC is looking for a two-bedroom rental accommodation for the family, as close to town as possible, according to Smith, as they will likely be walking and biking around town when they first arrive.

Back in May, VLC’s efforts became dire, as they were well short of their $17,000 fundraising goal. However, Smith said at the time, in-kind donations could be used in lieu of monetary donations.

As of now, VLC has raised the minimum funds needed to proceed, according to Smith, and any further fundraising would provide for any household item shortfalls, unexpected expenses, and a better standard of living.

The 2011 census, which was the last year data was available, indicated immigrants made up 10 per cent of Valemount’s population. At the same time — the national average sat at roughly 20 per cent — according to Statistics Canada.