The 39th Annual Family Fishing Derby was held at the Kinbasket Lake Marina September 5 and 6th. Maddisyn Smith won a bevy of prizes including the 13-15 year old category for Largest Rainbow at 4.91lbs, the Largest Kokanee .45lbs, and Grand Aggregate 13.38lbs.

Congratulations to all the winners. 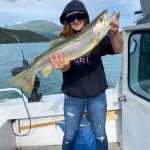 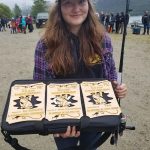