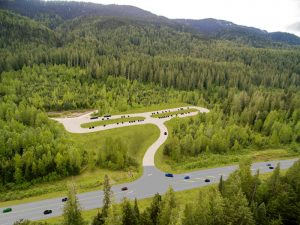 News that the government is improving access to the Ancient Forest/Chun T’oh Wudujut Provincial Park and improving its parking is good news. Despite there being an accessible boardwalk, the current parking lot’s slope makes it difficult to get in and out of a vehicle, not to mention it limits the number of vehicles.

Minister of Transportation and Infrastructure Todd Stone says improvements to the intersection and parking facilities at the Ancient Forest will enhance visitors’ experiences.

“Ministry staff have taken great care to respect the environment during the work, making every effort to consider the unique environmental diversity of the area.”

But tripling the capacity of the parking lot and providing better access comes with a responsibility – to ensure these ancient cedars (some estimated to be 1000-2000 years old) as well as the rare and fragile flora aren’t harmed by more tourism.

This summer, UNBC scientists discovered a plant – the Bog Adder’s-Mouth Orchid – not seen in the B.C. Interior for 84 years, plus many more rare species.

Clearly this is a place to celebrate – but also protect.

The universal boardwalk built by volunteers and donors was intended to improve access for those with mobility challenges – but the secondary reason was to protect the ancient cedar tree roots from damage due to foot traffic. The boardwalk also helps keep people on the trail and provides a deterrent to them wandering into the delicate ecosystem.

This boardwalk only covers approx. 500m of the 2.5-3km of total trail, but planks have been added around the rest of the trail. The government says it has plans to add a short extension of the boardwalk on the existing trail to the waterfalls at the top end of the loop.

I’m glad to hear there won’t be any more overgrown bush trail.

The number of tourists to the ancient forest has been steadily increasing. In 2008 only 13 people a day visited. In 2015, more than 55 people a day came to the site to use the trails (more than 20,000 annually). That number is expected to rise significantly now that the park has been designated a Class A Provincial Park. The park is also in the running to become a UNESCO World Heritage Site. You can imagine how much more traffic that would bring.

*This editorial was revised from its original version to reflect the amount of boardwalk already installed.