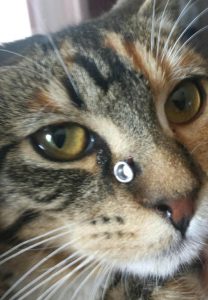 A woman’s morning routine ended abruptly when she discovered her cat had been shot.

Yvonne Dawson got home from her Tuesday morning walk to find her cat, Sadie, had been shot in the face with a pellet gun.

Dawson said her daughter, 28-year-old Amanda, was the one to find wounded Sadie.

“Amanda opened the door to let Sadie in, and she thought she just had something on her face,” said Dawson. “She went to rub it, but showed her dad once she realized it was a pellet.”

While Dawson admits she lets the cat roam freely, she said the cat doesn’t go very far. She guesses Sadie travels no further than a neighbouring yard.

Dawson said their pets are much more than just animals; they’re family.

“My daughter was just devastated,” she said.

Dolbec says people sometimes pick up cats from town and dump them somewhere outside of village limits.

Part of the problem, according to Dolbec, is people believe getting rid of the cat is going to solve the problem, but another one is likely to follow. Solutions lie in education and building better community relationships, she says.

“If you have a problem with an animal owner, get together and discuss solutions,” said Dolbec. “If we create better neighbours and better communities, it will be better for everyone.”

However, Dolbec said just because she’s trying to build positive relationships doesn’t mean firm measures can’t be used when dealing with irresponsible animal owners, or those who act violently against animals.

Dolbec said the RCMP is notified in aggressive or violent situations, and the Society for the Prevention of Cruelty to Animals (SPCA) is also notified to document the incident.

There are non-violent solutions to problem animals, Dolbec said, and she’s in her new position to help people realize there is another way.