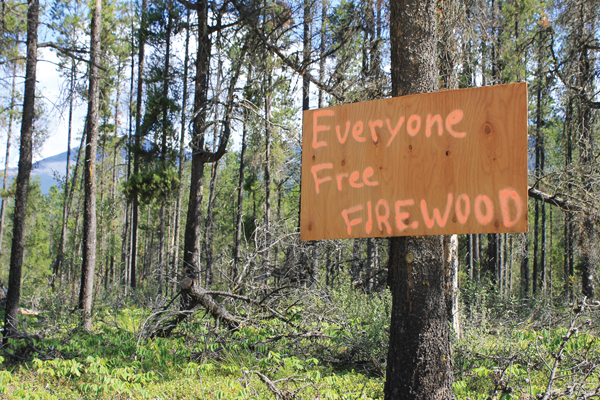 In early 2014, Lou Hartman brought in a contractor to log a section of his property between 9th Avenue and the trailer park he owns. He sold three loads, and was planning to use the rest of the wood in one of his houses. But some of it has been going missing.

Hartman currently lives in his newer house, and it doesn’t have a wood burning furnace, but his other house, also bordering on the property does. He’s had them both for sale, and plans to continue living in whichever doesn’t sell first.

“I’m intending to get the wood furnace fixed up again, because people like to burn wood,” says Hartman. “So that would go along with the sale of the house, or if the new one happens to sell I’ll move back there and still use it.”

Hartman has had some help from friends to pile most of the wood under a roof closer to the house, and he hasn’t noticed any disappearing since then, but there are still some logs on the ground that he plans to use.

“If they want to get firewood, there are lots of places out in the bush they can get it, they don’t need to haul it from my place,” he says. He says he’s seen stacks along the sides of some roads for years, people could take that wood if they need to.

“A lot of people didn’t know that was my property,” says Hartman. “I think that is kind of odd, I’ve lived here for close to 50 years. It was all bush when I came here.”