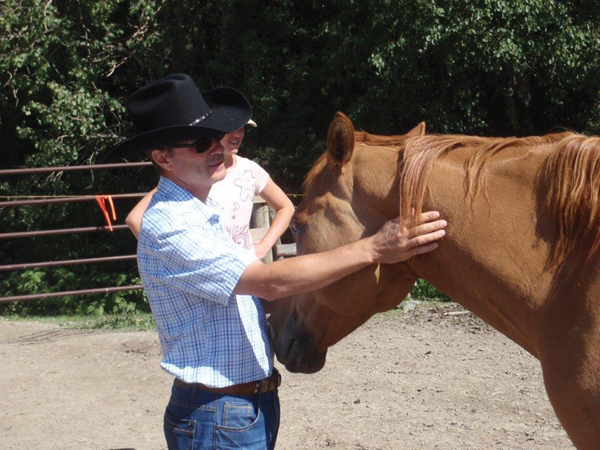 Last week Norm Letnick, Minister of Agriculture stopped in the Robson Valley as part of his annual tours, and met with a number of residents and organizations.
We didn’t have a lot of time as the meetings were behind schedule, and lots of residents were waiting to speak with Minister Letnick, but the Goat got to ask a few key questions in a one-on-one interview with him. Here are his responses, which were edited for brevity.

Q: Absentee land owners and availability of small lots for young and new farmers and families – There is a lot of local concern about people and companies from outside the area and the country buying agricultural farm land in the Robson Valley. Whether they are planting trees for carbon offsets (a growing concern), big game hunting, vacationing for a fraction of the year, or letting the land go fallow, they are putting very little into the local and provincial economy, and little into struggling local communities. Meanwhile, families who want to take up farming either cannot find land they can afford, or land is picked up too quickly, sometimes even before it goes to market. Do you think it is important for young families and new farmers to have access to farm land? What are you doing to make that possible or easier for young farmers to get started?

A: We support programs around BC like 4H (with three full time staff as well as resources), Young Agrarians, BC Agricultural Council (they have a priority to help young farmers get started), We’ve established a Centre of Excellence for Agriculture in Abbotsford (a two-year diploma program at the University of the Fraser Valley where young people can learn everything about working on a farm). It’s a business; it’s not just living on the land. If you can’t pay your fees you don’t last very long in any business, including agriculture. And we have online resources; we introduced AgriService BC, a one-stop shop for our ministry about two months ago, which offers the New Farm Start-up Guide, info on succession planning and everything in between. And we have 20 agrologists stationed around the province, one in Kamloops and one in Prince George, supported by experts in the field, so if someone has a question we have access to that expertise.

Q: Do those programs tie in with the Highway 16 region’s Beyond the Market program?

A: Jillian (Merrick, Program Coordinator) and I met yesterday, her ask is for more sustainable funding for Beyond the Market program. Right now it’s from various organizations like the Regional District. Jillian would like to see the program expanded throughout the province, and I think the price tag is around $330,000 a year. As the minister I’ve been successful in getting a 20 per cent increase in our Ag budget over the last couple of years to around $80 million. However a $330,000 increase for a new program is going to require a lot of work. As you can imagine, any ministry, like any household, the revenues and expenses are pretty tight. We’ll look at what is being delivered in Beyond the Market, and what we are already doing in other places and see what the gaps are, and what the best approach is to deliver.

Part of the analysis is also my desire to have a conference on agriculture next year on BC food security. The last study around 2007-08 said about 48 per cent of the food we consume was produced in BC, so can we increase that? We’re never going to get 100 percent, people like their pineapples and bananas, and even with climate change I don’t think we’ll be growing them any time soon, but we might be surprised in 20 years (laughing). There is an opportunity to get more production on the land we have in agriculture, and also see more land get into production. That’s why when I do my tours every summer. This is my third time. I like to stop and talk to local farmers and ranchers and groups, to find out what the key challenges are, but also to see what their solutions are. It’s not good enough to say hey, here’s a problem, fix it. We really need to know what some of the credible solutions are. That is why I want to bring them together and have them share ideas, so we can move together.

Q: What do you think about removing land in the Peace Valley from the Agricultural Land Reserve for Site C?

A: Well it’s one of those things you look at the benefits to the province that Site C is going to offer with long-term firm power. Not only do we have the benefit of the long-term firm power, but then we have the benefit of having wind and solar power, which are not firm but can piggyback on top of the firm power, because you need the firm power to support the wind power. That is not only good for downtown Vancouver; it’s also good for agriculture around the province because that will help maintain some of the lowest rates in the country and in North America. I think we currently have the third lowest rate in North America.

On the other side of it, you have some farmers (and BC Hydro owns a lot of the land already) who will be displaced. Their land will be flooded, and we recognize that it will be very serious for those farmers, and I feel for them. They will of course be compensated financially, but even with that, I feel for their loss.

Q: How do we get more land into the Agricultural base to replace that land?

A: We’re at about 4.7 million hectares in the province in the ALR. We had 33,000 new hectares put in the ALR since 2001, so net we are doing fairly well. BC Hydro is providing $20 million, over and above the buy-out of these farms, to the Peace Area which will be used by the Peace Area to help agriculture in the Peace. It will be up to them, the community, to provide recommendations to me as to what we do with those dollars. In a perfect world it would be nice to have a dam where it doesn’t impact anybody. But the reality is this is where it is.

Q: What about geothermal?

A: I’m a big believer in alternative energy sources, like geothermal, solar panels, wind energy; I think some of it is economically feasible right now. Others are going to take some time. In the meantime though, Site C, which is probably the last biggest dam project this province will see, from what I hear from the Ministry of Energy, will give us that competitive advantage we need to continue to grow the province. Agriculture doesn’t sit on a pedestal by itself, it works in collaboration with communities, with other ministries. Forests and Lands plays a big role, so does Environment, so does Aboriginal relations, we continue to work together to grow agriculture, but part of that is the cost of energy. I remember more than one farmer that has complained to me about BC Hydro charging them for a pump that wasn’t pumping. On one hand you are telling me you don’t want to pay BC Hydro for their costs, but on the other hand don’t do Site C; I can’t have it both ways.

So it’s a judgment call, and the judgment of the government, including me because I was at the table. We looked at the pros and cons in many ways for Site C, and determined that, while it wouldn’t help us, immediately as the current government, which a lot of governments look at, it’s going to help our kids. So we made our decision based on what we thought would be in the best interest of the next generation.

The questions we didn’t have time to get to:

Do you believe it should be harder for foreign companies to buy BC agricultural land?
Noxious weeds – knapweed, thistle, baby’s breath and others – are quite common and spreading in the Robson Valley; what are you doing to help stop their spread and to prevent new invasive species from arriving? And do you have plans to help protect especially sensitive areas like the alpine?
How are the upcoming changes to water licenses going to affect farmers and farming families in rural areas like ours?
If the Trans Pacific Partnership is signed, how will it impact our farming and agricultural sector and our food security in Northern BC?