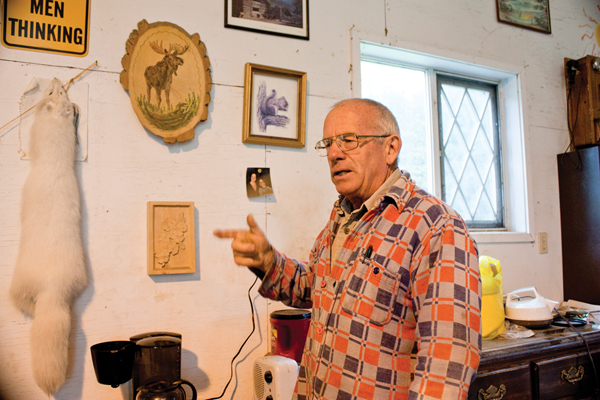 This is first part of a series celebrating the upcoming 100th anniversary of Dunster. The Goat is talking to long-time Dunsterites about what’s changed and what’s stayed the same. Chuck McNaughton shared memories and stories from the 1950s and 60s with the Goat, and what follows is an edited and condensed version of the things he said.

People traveled to McBride’s hospital for care. But there also used to be many traditional remedies, and a few common sense fixes, McNaughton says.

“My dad cut his thumb when he was a kid, really bad, in probably 1932, so they stuck his finger in a flour sack. That was the main thing to stop the bleeding. Get your bleeding spot in the flour and wait for the train. And he sat in the passenger train with his hand tied up to the baggage rack until he got to Jasper and they sewed him up. You can’t hold your arm up that long to get to Jasper. Five hours or six hours probably.”

McNaughton spoke about the thrift he grew up with, and the bartering that helped make a tiny community self-sufficient.

“A lot of elderly ladies would hand knit socks and sell them to you if you wanted. You probably packed in wood [in exchange for the socks], probably a quarter of a cord. It’d be a trade for sure. There’s always lots of little jobs to be doing. But nobody cared to mow a lawn much back then. They had no time.”

“When the socks wore out the ladies would chop a sock off just above the heel ‘cause it was the heel that wore out. And then they would take another one and cut it down from the top and that would be the fingers and those would go inside leather gloves. And then we also had some kind of rubber gloves for wet weather. And that was kind of it for gloves.”

“Steve Kolida, in McBride, he had a clothing store. He was always so generous. Dad had an old, old car, it had a rear end that went and it was laying up here. And Steve Kolida traded three pairs of jeans for the old rear end of the car. A lot of the ladies traded raspberries. I know one time mom and dad got a couch and chair for some fruit and vegetables.”

Dunster used to have something of a frontier feeling. It hasn’t always been families and circle dancing and freshly baked pies.

“One thing that’s changed a lot, when I was young there were quite a few bachelors. Just single guys, no wife, and they always made really good coffee. There’s not hardly any of them left anymore.”