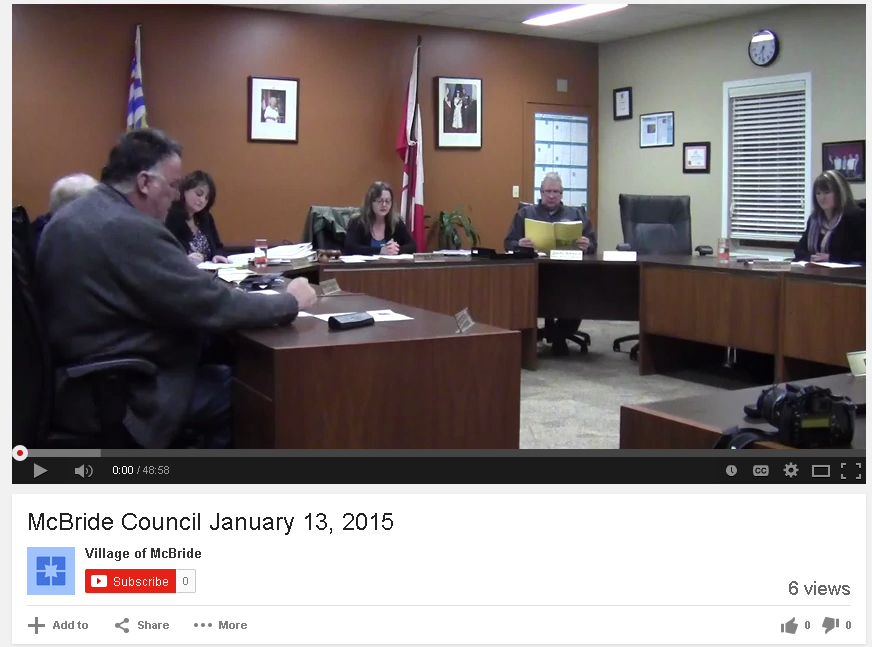 Members of the public have complained about an apparent lack of transparency and community inclusiveness in McBride Council meetings. One of the new Council’s first steps in addressing that is to have council meeting recorded and made public, so residents can watch in the comfort of their own homes.

Councillor Sharon Reichert has been spearheading the project to have meetings video-recorded and uploaded to the internet.

“I would really like to eventually have them aired on TV too, but that seems like a bit of a dream at the moment,” said Reichert. “This is a start though.”

Naomi Balla-Boudreau, librarian at the McBride and District Public Library, says they are using the Library’s camera. She says the footage from the first recording is not great, because of awkward panning, and not being able to see one side of the room, but that will improve as they figure things out.

“I think it is an important first step for Council, so good on them,” says Balla-Boudreau.
Reichert says she’d hoped to have the video uploaded to the internet by the Friday following the meeting. Uploading about an hour’s worth of video recording can take many hours with the current upload speeds in the Robson Valley. Geoffrey Roy, McBride’s Economic Development Officer, said it would take most of a day to upload.

It wasn’t available until Tuesday morning, but the recording is now public on YouTube. It can be watched at http://youtu.be/KOmxbSkN99Y or click on the link on the Village’s website – www.mcbride.ca/ under News and Notices.