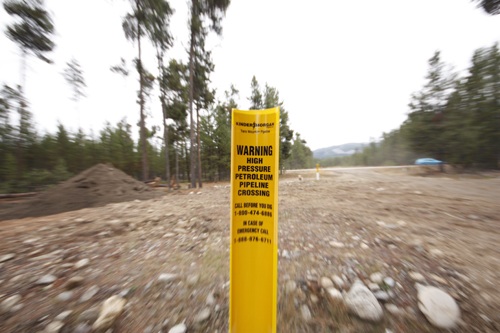 He said while they have to wait to see a formal application, “I don’t think that the Port of Metro Vancouver, as busy and as successful as it is, should become a major oil export facility.”

The statements brought Dix a flood of endorsements from environmental groups, some of whom have been lobbying against him.

The pipeline, first built in the 1950s and twinned through Mt. Robson Park in 2008 passes by Valemount, carrying bitumen from Alberta to the coast. The proposal would involve tripling the capacity from 300,000 barrels of oil per day to 890,000.

It would complete the twinning of the existing pipeline from Strathcona County, Alta, to Burnaby, BC where it is shipped to refineries abroad.

For the past 60 years, the 1,150-km Trans Mountain pipeline system has provided the only West Coast access for Canadian oil products, including the majority of the gasoline supplied to the interior and south coast of British Columbia. If approved, the project is slated to be operational in 2017.

Dix has already spoken out against the Enbridge Northern Gateway pipeline, saying “it is not in the economic or environmental interests of British Columbia.”

The NDP has pledged to take back the decision making process on the Enbridge pipeline from the Harper Government, The signing over of decision-making authority to the federal government was done by BC’s current Liberal government.

The BC Liberals criticized Dix for giving in to pressure to take a stand on the pipline after holding to a “matter of principle” that he would have to see the application first.

“Every time he was asked, Adrian Dix said he wanted to wait till Kinder Morgan had applied before offering a position,” says Energy Minister Rich Coleman. “Then out of the blue, under pressure, he abandons the principle he clung to for two years. That’s not leadership, that’s crumbling at the first sign of pressure.”