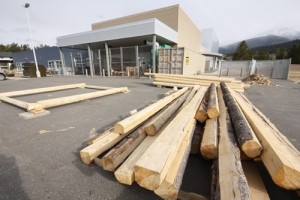 Teacher Dan Lawless and his Horticulture class have been busy. They are sprouting, pruning and getting seedlings growing, preparing soil and building greenhouse boxes.

On Tuesday morning the School District’s maintenance crew was due to arrive to build the school’s new 16×20 ft greenhouse.

The garden is also underway and outside the school a pile of wood shavings stands next to peeled logs and the first frame of a log cabin.

“Whatever our school ends up looking like, working in garden and greenhouse will definitely be a part of that,” says Valemount Secondary Principal Dan Kenkel.

These projects were part of an initiative to brand the school as a “mountain school” this past year.

But the mountain school idea did not fledge its wings quickly enough, Kenkel says. The idea was to attract new international students for an outdoor and local-focussed curriculum.

The greenhouse will be one of the remnants from that pilot project, as well as the gardening course and project-based learning model they began to implement in the log-home building class. 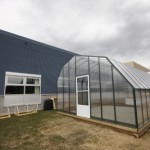 Next year and the year after will look even more different than the so-called mountain school. With fewer students translating to less government funding, the school is simply running out of money.

But Kenkel says they are working to find a model that will offer students more choice, not less, and to try to keep the academic focus strong.

When this year’s grad class crosses the stage, there will only be half the number that started out in Kindergarden.

In a healthy school, the graduating class population should be within 10 per cent of what the class started out as in Kindergarten.

Using elementary school class sizes as estimates, Kenkel projects the school’s population will level out in the mid-60s by 2020.

The school population has halved in the last five years – from 150 to 77. Part of the decline is due to the closure of the mill and families moving away. Other reasons include demographic changes and the urbanization of families, Kenkel says.

Fewer students mean fewer teachers. Two teachers are voluntarily leaving next school year – one moving away, the other going on leave. Kenkel has decided to spend the remaining school savings to keep the other five teachers at the school one more year. Kenkel will also be teaching halftime.

“I can’t cover off all individual courses on 31.5 blocks. It won’t work. I have to start combining and moving things around. And I’m already doing some of that. So we have to completely restructure, even for next year, but particularly in two years’ time.”

For the 2014-2015 year, two teachers will likely be laid off, leaving just four teachers, Kenkel included. Kenkel says he sees economic development that may attract new students to the school in the future, but he has to plan based on existing numbers.

He says if they don’t change they would have a huge number of multi-grade multi-ability classes “to the point where it’s a detriment to everybody.”

“Unless you’re a really skilled teacher, and you’re really bending the rules of curriculum, you can’t engage kids in Gr. 8 and Gr 12 in a subject area,” he says. “You can do it maybe in Physical Education or Woodwork or Art, but it’s really hard in math.”

Next year is what Kenkel calls the school’s change year. They will be trying out a new model of schooling focussed on self-directed, multi-grade and project-based learning.

It will involve more online courses called Moodle. These courses are not the same as distance learning, as a teacher in the school supervises and grades the course for individual students. Students have been signing up for Moodle courses for several years already, but it will mean even more courses in front of a computer.

In classrooms, rather than facing the teacher and chalkboard, tables may face each other. Students will be expected to complete their courses by scheduling themselves the time to do it. Teachers will provide more of an oversight or advisory role, than as a professor. Classrooms will be specialized areas where labs or workshops are happening.

Last weekend, several teachers attended a symposium in San Diego on a school model called Big Picture Learning. Another three teachers will be travelling to Colorado to a world-renowned school called Estes Park. It’s known for taking kids who dropped out of other schools and is based on students owning their learning principles.

Next year teachers will do more workshops, and the following summer Kenkel hopes to receive a grant to pay teachers work over the summer to nail down the new format.

He says if the school doesn’t stay a vibrant great place for learning, then professionals won’t want to move here and send their children to the school.

“The ones that can leave are the ones with options and exercise those options away from here and the problem gets worse. It’s our responsibility, as we downsize, to stay for students a centre for excellence in learning. We are in that now. I know based on data our results are competitive in the district and provincially, and considering some of changes gone through we’ve maintained very high level in quality in terms of learning. We need to continue to do that but do it differently.”

They are trying to get away from the timetable that has been limiting what they can do for kids, he says. He says on the plus side there is the opportunity to expand course offerings by 10 per cent.
What will the timetable next year look like? Kenkel says “one foot in future, one foot in past.” The year after that will be all “future.”

Some parents are concerned that offering more courses, and having fewer teachers, will mean teachers are not really experts in the subject matter they are teaching.

Parent Maria Lerch, who has three children who have graduated from VSS and two in high school right now, says she worries the changes will incite families to move away.

The model with the advisor teacher isn’t as bad as having no teacher she says, but she wonders how realistic it is.

“I don’t know if it is possible for those teachers to have all the knowledge in all those subjects.”

She says she is homeschooling her youngest son in Gr. 2, but she knows she would not be able to do it for high school. She thinks it would be an overload on teachers to oversee so many different courses. She also wonders about the effectiveness of learning online.

“Lukas comes home all the time and says ‘Mom, we need the internet at home now, because we’re going to do lots by Moodle and I need it at home.’”

Even though Valemount receives more per-student than urban schools, Lerch thinks it’s still an issue of funding. She points to the way the school district sends maintenance workers from PG as one wasteful practice that, if eliminated, could help fund teachers instead.

“If the government supports living in the countryside because it needs farms and loggers and CN people and whatever reason you live with your family in the country, you need to support and maybe look differently at student numbers when it comes to rural schools. So it’s still about funding in a way.”

She thinks the mountain school idea was ok if academics were kept up, but she believes there was less emphasis on academics.

Parent Sylvia Cuddeback, whose son is in Gr. 11, says the split math class this year for Gr. 11s and Gr 12s is not ideal. Next year will still involve some split classes but will be a move to more individualized learning.

“You’ve got to try new things,” she says. “You can’t just follow a pattern anymore.”

She likes the gardening program, and sees its value for all students.

Both Cuddeback and Lerch agree that some changes are necessary.

“We still have those two schools and I know there are many places in BC and all over the place where the school has closed,” Lerch says. “That’s what we have to acknowledge and be thankful for.”