It’s been several years in the making, but the draft Master Plan for Valemount’s mountain bike park is now complete and has been submitted to the Ministry of Forests, Lands and Natural Resource Operations. 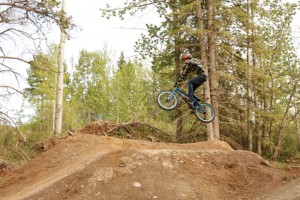 Once approved by the government and First Nations, construction on the bike park can begin – as early as spring 2014, says Andreas Thoni, who has spearheaded the project on behalf of the Yellowhead Outdoor Recreation Association (YORA).

He called the terrain a “diamond in the rough.”

The Master Plan includes both a cable car and bridge across Swift Creek at different locations; just under 40 km of trails; and a skills park to be located close to the TV towers, which could
include dirt jumps, ladder bridges, pump track, and teeter-totters. The park would be built to International Mountain Bicycling Association guidelines and Whistler trail standards.

Several existing trails, such as the common racing circuit and a downhill trail known as “Andreas’ Trail” built by Thoni when he was younger, will be incorporated into the final design.

The idea is to mix challenging and intermediate terrain, as well as stunt options and some cross-country biking.

Many of the trails will be multi-purpose, the plan says, and will allow the use of runners and hikers. The plan notes that motorized uses like ATVs and Snowmobiles should not be allowed on the
groomed trails to avoid erosion of the trail bed and user conflicts.

The trails will link up seamlessly with trails in-town, such as the Big Foot Trail and possibly the marsh trail. Currently there is no obvious trailhead for the 2-mile viewpoint, 5-mile road or the
Swift Creek Trail, meaning few tourists venture down these routes.

“It’s basically creating a cycling friendly community so I can get from a hotel to a pathway and then to a trail system and not get lost,” Scott said last summer. “Not that Valemount is that big,
but it would make it easier.”

Thoni says now that the plan is complete they can apply for grants. He says the estimated cost of $500,000 to $1.3 million is high, and they could feasibly construct the park and trails for as
little as $350,000 by eliminating the most expensive trail, a descent from the summit of Mt. McKirdy. Thoni says they will be looking at a number of government and non-profit grants for the bulk of
the financing.

The construction will involve professional trail builders from outside the community, but Thoni says they will make use of local contractors wherever possible.
Separate upgrades on 5-Mile road will proceed this year as planned. The road upgrades are an independent project between YORA and the Valemount Community Forest, but will facilitate access to the
bike park.

The community forest is eliminating several switchbacks and the steepest grades to enable small vehicles to reach the top with less difficulty. Their staging areas for the roadwork can later be converted into parking lots for the bike park.

The road will double as a shuttle road for the bike park, Thoni says, since mountain bikers will likely drive to the top, bike down, and have someone meet them at the bottom to get back up again.

The park would cover a large part of 5-Mile hill, an apron of McKirdy Mountain, except for the areas that are private land. The road and existing trails are currently used for skiing, hiking, biking
and sightseeing.

Scott says the idea is to create a 2-3 day riding experience for mountain biking enthusiasts, many of whom traverse BC and North America going from one mountain bike to the next.

Often riders will make week-long road trips hitting different riding locations. The Valemount park will also include the option of spending a night at McKirdy cabin and exploring the beautiful
McKirdy meadows and other alpine areas.

Thoni says Jasper is facing pressure from freestyle mountain bikers who want more interesting terrain, but encounter closures due to wildlife. Valemount may become an excellent option for those
seeking adventurous biking.

The local mountain bike club at the high school has competed provincially several times. The new park will make it easier for Valemount to host competitions and expand the number of riders involved.
Skills parks make technically challenging mountain biking more readily available to the public, especially to youth, Thoni says. Riders return to these parks again and again to improve their
abilities. He says the park will attract riders from all over western Canada.