How to improve the lives of Valemount’s youth: that was the subject of a second meeting following up on the Give Youth a Voice initiative. 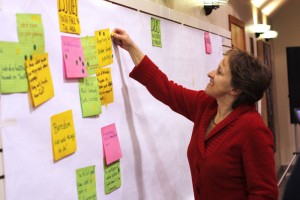 The second meeting was held to decide how $25,000 of Columbia Basin Trust youth grant money would be spent in the community over the course of the year.

As part of the program, CBT will provide the same amount for four years to improve Valemount’s youth activities and infrastructure.

Many ideas were discussed about how to fix the problem of boredom in Valemount. The youth who attended the meeting represented the youth of Valemount; there was only one girl, however, the rest of the youth were boys. The young people were asked their opinions on how to improve youth opportunities.

Ideas of improving organized sports, swimming infrastructure and mountain bike trails were discussed as opportunities to spend the funds.

There was a lot of tense discussion as there were many people passionate about what they thought should happen with the $25,000 grant.

As one of the youth in the room, I noticed that there was a lot of talk between the adults, but the youth weren’t making their opinions heard. One of the meeting participants also noticed this and suggested that the youth have ten minutes alone to talk.

Once the adults left the room, you could tell that the youth had more ideas than they let on. There was open discussion and criticism about ideas and perspectives that hadn’t been presented while the adults were around. We made a list of things that we wanted to bring up and presented them to the committee.

Some of the youth criticized ideas that had been presented earlier by adults – such as upgrades to Cranberry Lake, since we felt it wouldn’t be used as much.

If you missed these meetings there are still opportunities to get involved and make your voice heard!