Every summer, my father would grow a vegetable garden. There would always be tomatoes, cucumbers, carrots, radishes, green onions, and potatoes. Sometimes other things. Dad loved to sit on the picnic table with the garden hose after supper to spray the plants by hand, smoke cigarettes, and enjoy the evening. 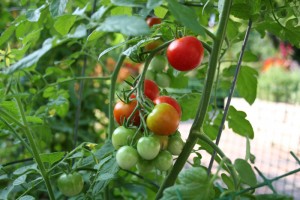 Dad was a steelworker and went to bed before 9:30 every night so he could wake up early and earn his living.

One year a new family moved into the area and as things would become ready to harvest, Dad would notice someone had come in the night and helped themselves to a little. But he didn’t particularly care, because there was plenty.

Every year that followed, the same thing would happen, except that the garden raiding got progressively worse. After several years, he came home from work one day and discovered that EVERYTHING was taken. And then when he noticed even the potatoes had been dug up and stolen, he was so angry that I won’t tell you what he said, but it involved a long string of vulgarity like I’d never heard
before or since. I was 17 or 18 at the time.

Dad was a really nice guy. But he was also a WW2 veteran. And steelworkers do a TON of physical labour. So he was not someone you’d ever want to get THAT angry with you. Holy, he was some kind of mad.

The next day, Dad brought a big red fire alarm bell home and we connected it to a trip wire he put around the edge of the garden. We tried it out a few times to make sure it worked. It was loud enough to wake the dead, and it would ring and ring and ring until he shut it off manually.

One night as I was walking home in the dark, along the riverbank, enjoying the sound of the summer crickets and the cool evening breeze, as I came to the back of the property, it hit me just how funny it would be if I hopped over the fence to give that trip wire a yank and then hid in the bushes to enjoy the show!

So, I did. The alarm bell went off and all hell broke loose as I jumped back over the fence and headed for the brush to hide.

I remember giggling to myself and thinking how funny it was going to be. Dad seemed to be taking longer than I estimated to come through the back porch door, but I knew it was worth it. I guess 2 or 3 minutes went by.

Suddenly, coming from the pitch black, right next to me in the bushes, I heard a voice: “So, you think that’s pretty G-damn funny, do you?”

We always had a fairly good idea who was robbing the garden. When things were harvested Dad gave a lot of it away to anyone who expressed an interest. But to take everything – and to bring a shovel and dig up the potatoes – that was just plain insulting and getting too brave.

But after my midnight raid, it never happened again. The bell was loud enough to be easily heard all across an area the size of Valemount, and the neighborhood was sound asleep until I came along.
I’m guessing that was enough to drive the message home.