This week I sat down with Jeannette Townsend, former Valemount mayor and current Vice-President of the Valemount Chamber of Commerce. We ate lunch at the Lucky Panda Restaurant and discussed everything from Oberto Oberti’s proposed all-seasons resort to the Chamber of Commerce’s plans to revitalize itself this year. 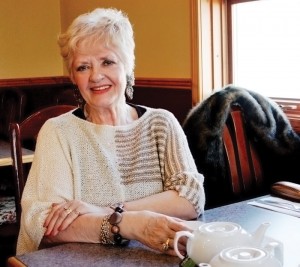 During the softwood lumber crisis a decade ago, then-mayor Jeannette Townsend wrote a letter to President Bush.

In the letter, she explained the impact the softwood crisis was having on her community.

At the time, the Valemount economy was based primarily forestry. Without BC softwood lumber exports to the U.S. the industry was entering a famine. It was a slow descent until the Valemount mill finally closed in 2007.

David Baxter, Dr. Michael Goldberg, and forestry and tourism industry reps were present at the seminar.

“One comment by Dr. Goldberg that has always stayed with me is that if you only have one industry your municipality, your people, the economy are all subject to the fluctuations of that particular industry,” Townsend says.

Goldberg said it’s important for community to have a secondary industry to act as a shock absorber when fluctuations occur in the main industry.

She says tourism was really growing at the time, so they decided to pursue forestry and tourism, to form a blended economy – something that is still not perfectly formed today given the further continued slump in forestry.

Townsend says ever since she and her husband moved to Valemount several decades ago, the forestry industry has fluctuated.

“It was always up here or down there – there was never any happy medium.”

She notes the success of the Community Forest, however, which brought in $12 million dollars to local coffers in 2011. She says she would like to see more of that wood processed and used locally.

Since the town has come to rely heavily on tourism to keep afloat, Townsend says she is glad to see Oberto Oberti’s proposed all-seasons resort making progress.

“I support it fully 100 per cent,” she says. “I really would like to see the entire community get behind him so all his needed support from the community is there.”

But she says it’s also important to remember some wisdom from the absurdist play “Waiting for Godot” when it comes to expectations. In the play, two men wait in vain for someone named Godot to arrive. Neither man really knows Godot. While they wait, they go about their daily rituals – they eat, sleep, converse, play games, exercise etc.

“Hope deferred maketh the heart sick,” Townsend recalls from the classic story – a line that is taken from the book of proverbs, said by King Solomon, who was renowned for his wisdom.

“One should always temper their expectations, but one should never, ever give up.”

She says she would like to see mayor and council consider a Valemount and area economic development committee, similar to one that existed while she was in office. The previous committee set priorities and discussed ideas and projects. At the time, they decided a goal population of 3,500 people would be ideal. Townsend says she still thinks that’s a great number.

If the resort goes in, the town would likely expand. But if the village boundaries were widened to encompass the resort, she says there would need to be a cost-benefit analysis study. It would have to be a mutually benefiting arrangement.

“If an investor is coming, it’s not an altruistic motive – I think most businesses do want to see that the municipality in which they are investing benefits, but they should be rewarded for taking risks.”

“You can’t keep a business open if you don’t turn a profit.”

As vice-president of the Chamber of Commerce, Townsend says she would like to encourage new businesses to open in town, but also improve awareness of existing services.

The Chamber is planning a business to business networking event and hopefully a trade show later in the year, where local businesses can set up a booth and residents can browse the displays.

She says they have an excellent executive right now and would like to see the Chamber grow. She knows some people are reluctant to join because of things that happened in the past.

“I always say, if there’s something about something you don’t like, then get in there and help to change it.”

If someone is too busy to get involved, their membership still matters.

“If there’s something that requires strong representation then their signature is there, their company is represented. What people need to understand is that if a statement is made by a Chamber of Commerce, it has clout, much more so than an individual making the same statement. It will have clout with the Regional District, with the Province, and other senior levels of government.”

She says the most important role for the Chamber right now is to bring businesses together to work more closely in partnership.