Valemount and McBride – two mountain towns of similar size, positioned on the highway with enviable access to nature. 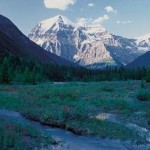 Each community has beefed up its approach to tourism in the past decade as forestry markets have become less reliable. But until recently there has been little cooperation in terms of marketing.

The Regional District of Fraser Fort George has partnered with both villages and the Community Tourism Foundation to come up with a strategy to market tourism in the Robson Valley.

There will be three separate strategies – one for McBride, one for Valemount and one for the region, says Rene McCloskey, spokesperson for the regional district.

“It’s exciting to see the collaboration between the communities, moving from a place where they felt they were in competition with each other to really starting to appreciate there are greater opportunities by working together,” she says.

Last week representatives from both villages, the regional district, and Tourism BC met in both communities to brainstorm and set priorities.

From those sessions they will develop the marketing plan, says Clint Fraser, Strategic Planning and Marketing, Northern BC Tourism region. While there are components of developing attractions, he says the plan will be mostly about marketing.

“It’s really going to be providing recommendations and strategies on how to attract visitation to the region.”

He said signage and sorting out the legal uses of trails and land were a big part of the discussion, but there were many other topics of conversation as well.

Fraser says Tourism BC hopes to get the plans together in the next few months. The plan will contain recommendations for roles and responsibilities for each of the strategies. He says they expect local groups and government to pick up and run with the responsibilities, as outlined in the document. Tourism Valemount will likely be part of the implementation, he says, but other groups will be as well.

The timeline and scope of the plan is usually good for 2-3 years.

McCloskey says they have never intended that anything they do on a regional level take over from what is already happening on a
community level.

“Everything you’re doing to promote your communities, whether it’s economic development or tourism should still be going ahead.

The hope is maybe we can leverage that with a regional strategy, with the strength of coming together.”

The tourism plan will be forged with the help of the Community Tourism Foundation through Tourism BC, and then blended into a final “master” document with the other marketing strategies outlined in the 2010 economic opportunities plan, McCloskey says.

The 2010 plan outlined five areas of priority that should be pursued: Lone Eagles and Active Retirees; Agriculture; Tourism; Forestry and Wood Products; and Senior Government Services. The Regional District has commissioned Millier Dickinson Blais, the same company that penned the report, to come up with marketing strategies for the remaining areas.

McCloskey says the final report will be a planning document with the ideas, work and cost involved, but they will then need to find money for the implementation.