Paving of the Bigfoot Trail has just finished, and although it was just under construction a few days ago, it is getting a lot of local use. Rollerblades bikes and strollers have wheeled their way onto the new and smooth surface of the Bigfoot Trail. I decided to set off, and find out what people thought about Valemount’s newest addition to the streets. 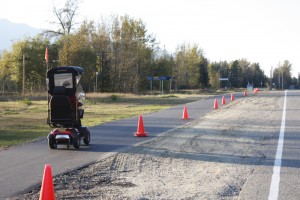 I met Gary Braun while he was going out for a walk. He had just got back from swift creek and was walking on the path. He liked the idea of the Bigfoot Trail, because it was a safe alternative to the roadside and planned to use it in the future. The trail’s maintenance and expansion were key in his mind, if the trail was going to last.

Mary Riesterer, a pedestrian going for a brisk walk, had some strong opinions about the Bigfoot trail. The trail is a good idea she said, because she could go for a walk and not have to worry about cars, allowing her to “zone out.” The fact that tourists would be more inclined to explore downtown Valemount, and see the businesses there, made her like the trail even more. She said the trail could be improved by painting Bigfoot footprints along the path.

If Mary saw Bigfoot while walking, she would ask him to join her; after all, Bigfoot needs to stay in shape too.

When I met Glenda Whyte, I was astonished that she didn’t own a car. She is a frequent user of the Bigfoot trail, because she walks around town to do her daily errands. She thought footlights should be added to the trail to illuminate the pathway during the night. She said she would use the trail in the winter, if it was cleared. The curve in the pathway around Centennial Park was one of her favorite features, as it gave parents with children or strollers, easy access to the park.

Whyte has seen Bigfoot before. It was in trail B.C. She claims that she saw a Bigfoot mother and child. If she encountered one again, she would try to have a conversation with it, as long as it didn’t make a break for it.

Once I had recovered from Whyte’s shocking tale, I went to some of the businesses along Main Street. I wanted to know if they were getting more customers because of the trail.

Sylvia Jungo, the owner of the Swiss bakery used the trail and thought it was a great idea. She said the trail is very important because it gets people away from the highway and into the heart of Valemount. When i asked her about improvements she replied “so far so good.”

Not all businesses have noticed an immediate change in the flow of tourists. Alex Woo, owner of the China House restaurant said he didn’t think the trail would make much of a difference to his business. He also questioned the use of the trail in the winter, as it might not be cleared.

But if clearing the trail was the only problem the village faced, their problem would be solved with as little as five dollars. Some kids at Centennial Park told me they would clear the trail. Two of the boys, Benhardt Du Toit and Wyatt Wikstrom volunteered to clear the entire trail for $20. Another boy, Logan Forman, said to them “$20 is too much. I would do it for five!” The kids had some other opinions about the trail. Danelle Du Toit said her favorite part of the trail was the smooth new surface that she could ride her bike on. Wyatt Wikstrom said that the trail could be improved in the future, with street (or trail) vendors selling lemonade and other small things to people passing by.

When I asked all the kids, what they would do if they saw Bigfoot, their answers all came at me at once. Some of their ideas ranged from catching him to getting his autograph.

Valemount’s residents have, for the most part, responded positively to the Bigfoot trail. They enjoy the convenience of the trail’s route, and the safety that it provides. There were some suggestions as to how to improve it, but at the moment, the trail is good enough for them.