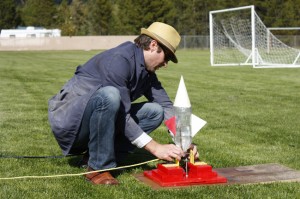 Valemount’s high school has started its first year as a “Mountain School.”

The outdoor/environment-themed curriculum is designed as a way to attract and retain students to the school, which has suffered from declining enrollment for a number of years.

According to a School District 57 report, Valemount Secondary is projected to continue to decline in enrollment over the next five years. This is partly due to demographics (the echo-boomers have not yet hit high school) and partly due to fewer young families in town.

Valemount Secondary School is sitting at 78 students this year – in between their best and worst expectations, says Principal Dan Kenkel.

Kenkel says new families, such as new CN workers and extended family members who have moved back have brought new students to the school.

They received no international students this year, however – something that Kenkel says needs to change if they’re going to boost enrollment.

The business agency that currently liaises between potential international students and schools could not find any homestay families in the Valemount area. Kenkel says the length of stay and the stipend of just $300 a month are part of the difficulty.

He sees an opportunity for the school to contact a different agency – a local one if such an agency existed – to coordinate the international student program in Valemount.

The school has one year to find 20-30 new students to maintain the existing staffing level at the school. He says they plan to focus on just a few international school contacts in Europe, instead of broadcasting the invitation to the entire world.

“We are gearing up for next year in a very optimistic way,” he says. “If we can get 15 or 20 kids from just going after one target, we’ll be way further ahead, at least for our start-up year.”

He says the mountain school’s outdoor and locally-based focus has received positive feedback so far, but next semester will take it to a new level with several new courses, including gardening. The school is trying to gain approval from the village to lend a piece of village land to the school for the garden, greenhouse and orchard. The land is ironically reserved for school expansion, which Kenkel says they won’t need any time soon.

They plan to plant native berry plants and apple trees in the orchard and install plumbing for the greenhouse.

Another course semester will introduce the students to greener technologies. Students will get the chance to build solar panels, wind-powered machines, passive solar power, as well as the ever popular bottle rockets.

He says the new focus of the school to be more locally-based, outdoor-focussed and collaborative is the direction they should be headed.

“Even if we weren’t struggling with enrollment, it seems like this is what we should be doing anyway.”