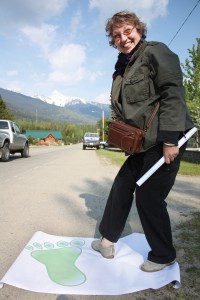 It’s been more than a year since Valemount resident Marion Farquharson dreamt of The Big Foot Trail, but construction is now set to begin.

The original idea was to provide a loop walking trail within village limits to help funnel tourists into different commercial and recreational areas using painted feet on the road. Now the plan is for a raised asphalt path with a budget of half a million, thanks to grant money.

While almost every road in Valemount is paved, there aren’t many sidewalks.

“This project helps build a walkable community for residents and visitors. The former council should be commended for their vision and working with Farquharson’s passion,” said Valemount Mayor Andru McCracken.

The Big Foot theme pays heed to an early and documented sighting of what was thought to be a sasquatch in the Tete Jaune area. Tourism Valemount is investigating ways of signing and promoting the concept to visitors.

The loop is approximately three km long, connecting Highway 5 to Main Street with a well marked walking path along 5th avenue. It includes a new walking area along Main

Street and the railway tracks from 5th Avenue to Dogwood and a new path along Dogwood from Main to 5th Ave to complete the loop.

Farquharson says after a long tiring bus ride, tourists want to get out and walk, so they venture down 5th Ave, some as far as the rail crossing, then turn around and come back. Marion surmises that the reason that the tourists do not venture past downtown or the Caribou Grill is they don’t realize the village extends beyond the crossing. It may also be because they don’t realize they can loop back into town.

Alpine Country Rentals has been chosen by the Village to construct the walkway, which includes raised sidewalks and signage. Survey and engineering work will begin first, as the engineering design is completed says McCracken. The exact route may differ slightly from original plans, and will likely include some curves in the trail.

“Vincent Clark and his team did a great job developing their own vision of the Big Foot Trail,” said McCracken. “It’s exciting to see a contractor so passionate about improving the town.”

The trail is scheduled for completion at the end of the summer 2012.