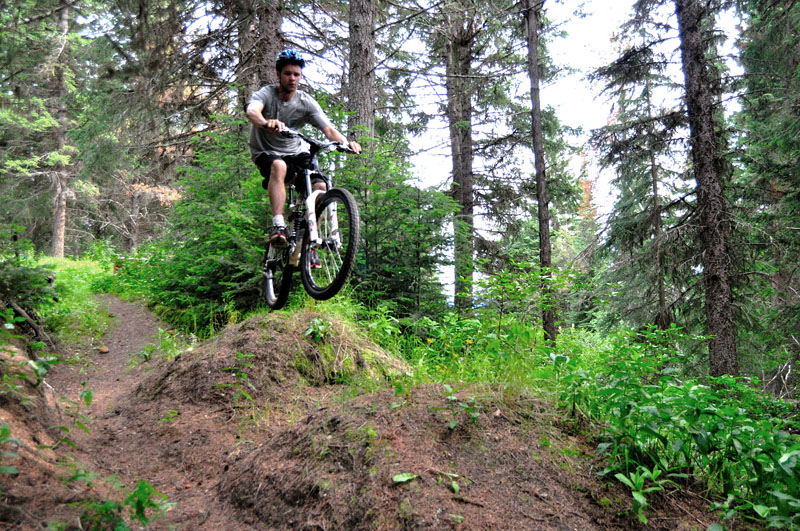 The trail starts with a few yellow ribbons and POW, you meet your first gap jump. As I prepared to launch, I thought ‘My goodness, if I’m too slow then I don’t make the gap, which means I’m going head over tea kettle; too fast puts me off the trail with a similar ending.’ They were just thoughts though and they didn’t stop me from flying. After I landed it was smooth sailing for the rest of the gnarly descent.

Upper Andreas’ trail, which is described above, like many in Valemount, is seeing more riders each year as people hear about our trails and come to check them out.
But how are they hearing about the trails? I believe this is partially due to the Valemount Timberwolves success which has helped put our valley on the mountain bike map.
“We have some pretty good trails here for preparing a rider, such as a few nice challenging climbs and some good technical downhill,” says coach Les Van Der Roest.

The team began 14 years ago when the now former teacher Les Van Der Roest came to teach at the Valemount Secondary School. After a few months of training our team was off to provincials.

“When we arrived to race people were like ‘Where’s Valemount?’ and a few years later it was ‘Here comes Valemount!” Van Der Roest says.

Since the teams beginning they have been the number one “A” biking team in the province. I say first “A” team because at provincials for biking, there is also “AA” and “AAA” schools.

Besides being top dog for single “A” BC Schools since the beginning, in 2009, they managed to pull off the win of a lifetime and capture the first place overall. The team has also had many close seconds, thirds, and fourths since its debut in 1997.

While the interest in the local rides is great, people are always asking “Which trail should I ride”, or “Where are the trails here.” To solve this question for future visitors wanting to ride the trails, I have decided to ride and review the major trails throughout the Robson Valley and Jasper. Tune in next week for information on more rides.