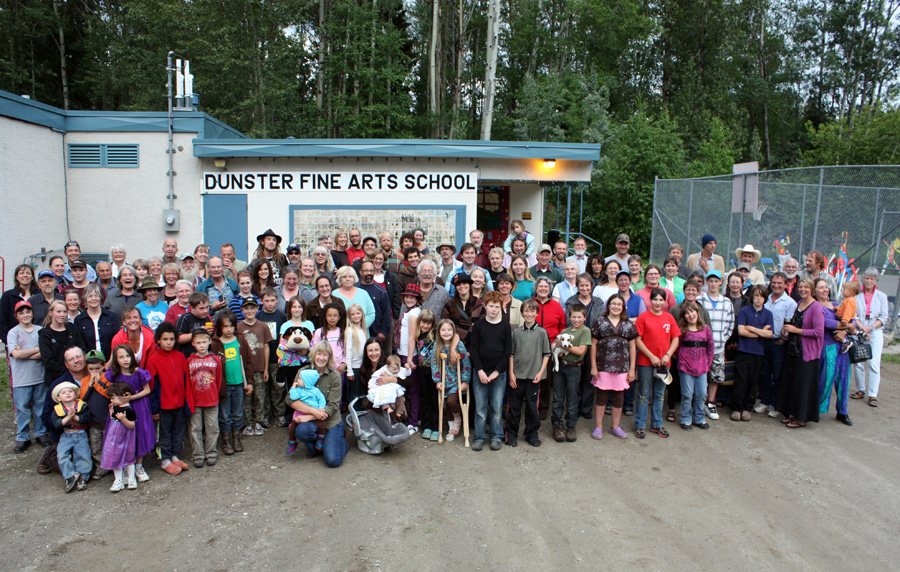 The canvas tent that currently stands next to the Dunster Fine Arts School grounds will be coming down this month, as students once again have free rein in the halls of the Dunster school building.

As of Nov. 1st, the Dunster Fine Arts School Society, created this summer for the purpose of obtaining the building, will pay just over $450 a month for the mortgage, plus utilities and insurance, for seven students to attend home-schooling classes inside its walls.

Parent Seth Macdonald was part of the effort to keep the school building open for the use of their children.

“We fought so hard to get hold of the building,” he says. “It’s daunting. But it’s the best scenario in my view.”

School district board chair Lyn Hall says the board has submitted a request to the Ministry of Education for approval to transfer the building.

“This is no different than any other real estate transaction,” he says. “The only difference is there isn’t a bank or lending institution involved. We are the holder of the mortgage.”

He says desks and supplies will not be returned to the building, since it is only the land and building being sold.

“It’s really precedent-setting and it’s a very good approach,” Hall says. “I think it’s a real win for both sides.”

The society had enough money through donations to pay the $3,000 down payment. Macdonald says they will be doing aggressive fundraising, applying for provincial and federal grants, and seeking private donations to fund the school. He says utilities alone could be as much as $9,000 a year. Insurance costs would be on top of that. Broken down over the year, with no change in enrollment, the cost would be upwards of $2,000 per student per year, without taking into account insurance and repairs.

Macdonald says some of the students who have enrolled in the McBride or Valemount elementary schools may return, but nothing it certain. There were 27 students enrolled at the school at the end of June when the school was closed, the school district citing budget restrictions and low enrollment for the closure. Members of the school board estimated they would save roughly $172,000 a year by closing the school.

Hall says while the sale is “precedent-setting” the district will not be listing other empty school buildings for sale. Some 13 other elementary, middle, and secondary schools were closed last year. He says they will consider applications to use the buildings from community groups.

Macdonald says parents and community members will continue to take turns acting as teacher as they have thus far in the school year. He says they are still in discussions with the school district about implementing a Wells model for the 2011-2012 school year, where the district would supply a teacher. He says they may go down to a 3-day school week in the school, with remaining class time conducted at home, in order to cut costs.

The school society currently has over 100 members.

Macdonald says they will now look at ways to use the building for purposes other than elementary education, and plan to host a concert there at the end of October.