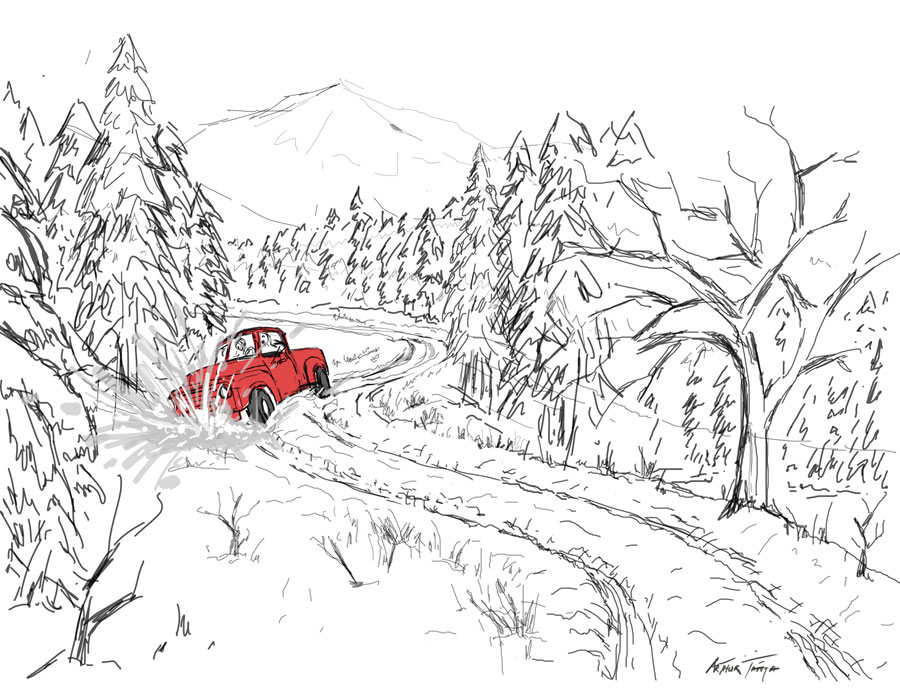 This story is about an experience we, Don and Adella Gordon of McBride, had about 60 years ago. We were both in our teens then and had been dating about three months, when my mom invited us to visit her. Of course, I wanted her to meet my beautiful little blonde. Mom lived near Lytton, so to make the trip a bit of an adventure. We decided to take the train to Valemount rather than drive. Although it was getting later in the fall, the weather was quite mild, for Della remembers wearing a skirt.

As we were waiting in my car for the train to arrive, the motor starting knocking, so I realized we would have to find another way home when we returned. We had a good visit with Mom and on the way back I found a fellow who was on his way back to work at Lammings Mills, the same place we were from. He had left his vehicle – a yellow Studebaker pickup – at Valemount and graciously offered us a ride back with him. We arrived back in Valemount early Sunday morning facing a drastic change in weather. Winter had arrived with close to two feet of snow and 20 below temperature. Our friend got his pickup going and we started out. There was only one set of tracks in the fresh snow, and we soon discovered that in order to keep from being pulled toward a ditch we needed to stay in those tracks. Our friend had good stories to tell, and while sharing stories the pickup kept veering to the ditches. We both tried respectfully to caution him to be more careful. We hadn’t gone far, when suddenly we found ourselves in the ditch practically buried in snow. A quick search turned up matches and some lunch paper. Looking around, after fighting my way back up to the road, I saw,, hardly believing my eyes, a big spruce tree with a lot of dry limbs at the bottom, near the edge of a field, just across the road from me. It didn’t take long to get the fire going, and help Della over to it.

It was about an hour and a half before a logger came along and pulled the pickup back on the road. When we were ready to leave, Della asked our friend if I could drive. He consented, and we made it safely home. Were, where my car motor started knocking, to the big spruce with the dry limbs just coincidences? We don’t think so. We believe they were all providences of a Loving God taking care of His kids which He has continued to do many times since.