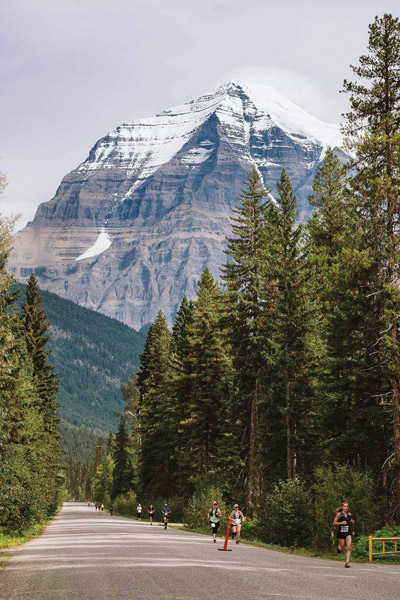 The 9th annual Mount Robson Marathon took place Saturday September 7th under sunny skies. The majestic peak of Mount Robson towered above participants who came to the Robson Valley to run the iconic Berg Lake Trail. The event offers a 50km Ultra Marathon that takes runners from the Visitor Information Centre up to Robson Pass and back. There is also the Half Marathon, Kinney Lake 12km, and the Flatlander 5km runs.

The event has a 500-runner limit and this year was sold-out well in advance of race day, organizers say. Most runners came from B.C. and Alberta. Some came from the USA, Australia, and Germany. Many runners have participated in this event before.

“The spectacular route and friendly community atmosphere keep them coming back,”

This year’s winner of the 50km Ultra Marathon, Francois Dagenais Cote, won the event last year and was 2nd place in 2017, 2016 and 2015. This year he improved time from the previous year by just over a minute, finishing in 4:00:26. The winner of the women’s Ultra Marathon, Kaley Cochrane, set a new course record of 4:27:08 and was fourth overall, with only the top three men able to finish in front of her.

A total of 18 Robson Valley locals took part in the Half Marathon, Kinney Lake 12km and Flatlander 5km runs. A group of moms, Rundi Anderson, Sherri Malone, and Jayme Deurksen have been diligently training together throughout the year. They meet in the early morning three days a week to get their training run in before the demands of work and family take over the day. They took on the goal of the half marathon together, ran much of it together with another local mom Gwen Barker, and all finished within two minutes of each other.

The Kids’ Fun Run was also a huge draw for locals. Some 57 children took part in the free 800m run around the Visitor Information Centre. This was almost double the number that have run in previous years, and they were divided into two races since there were so many. Jerry the Moose and the BC Parks Rangers were there to give high fives, cheer kids on, and hand out awards.

Three Ranges Brewing Company provided custom engraved growlers and gift certificates for the top three finishers in each category, and the winners of the Ultra and Half Marathons each received a new pair of shoes from Totem Jasper Ski shop. There were also finishers medals for all participants and draw prizes.

Over 40 people volunteered this year. Some spend the night before camping out on the trail, and get a good workout hiking the route with aid station supplies in hand. Many local sponsors contribute prizes, helicopter transportation, accommodation, volunteer meals, and aid station supplies. The Mount Robson Marathon is run by YORA, the Yellowhead Outdoor Recreation Association. Proceeds from the event go back to the community in the form of trail upgrades, backcountry cabins, ski trail grooming and other outdoor recreation projects.