The senior citizen who fell to the ground when a flight of outdoor steps collapsed beneath her at the Golden Years Lodge last month did not escape unscathed as initially reported. Flo Ball, 84, an otherwise healthy senior, learned at the end of August that she fractured her shoulder from the fall.

Ball said she is private, independent and “not the type to complain,” but she said if another senior had fallen it could have been much worse.

“I just hope that nobody else hurts themselves here,” she said.

The stairs that collapsed and another deteriorating set have now been replaced, But Ball points to other pressing issues.

“If you look at my patio there at the back, it’s all rotten. And that’s supposed to be the fire escape.” 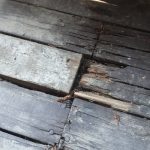 As previously reported, a contractor who saw the damage told the Goat the collapsed stairs were not built to code, had rotten sections, no supports between the risers, and had inadequate or rusty hardware. The collapsed steps are the same age as many of the patios and patio steps according to residents. Many patio steps have been temporarily repaired with brackets.

She said things take time and pointed to the fact that the society is run by a volunteer board. A part-time administrator oversees the day-to-day needs of the lodge with the help of a part-time custodian company. No changes in staffing have occurred since the incident.

McEachern said they reviewed their protocols after the stair collapse but didn’t make any changes to their protocols or to the way the lodge is run. She said they were told by outside inspectors, including one sent by BC Housing last year, that the stairs were okay and the Society relied on their expertise.

After the story about the stair collapse ran, Ball was approached by a former employee who said they had flagged the issue four years prior.

The Goat was also approached by a former employee who said they raised the deteriorating stairs as an urgent safety issue with the lodge’s administrator four years ago; that person did not want to be named.

Ball said this is part of the problem.

“Everyone is afraid to approach management,” she said.

Ball’s daughter Rhonda Ball said she doesn’t accept the low standard of maintenance and believes there should be a full investigation.

“I don’t want to see that building shut down by any means,” Rhonda said. “But I want to see it brought up to where it should be for those people that live in them.”

BC Housing told the Goat it reviewed and assessed the incident on Aug. 15th.

“If an operator fails to comply with the terms, BC Housing may choose to cancel the Operating Agreement.”