Farmer, veteran, and inventor Phillip Marsh has developed a technology that can help battle climate change and create useful products from organic waste, and he has done it on his family farm on Mountainview Road in McBride.

When Marsh came back to the farm in McBride after a career in the military, he saw how farmers struggle to make a living despite having access to a lot of energy.

“Farmers control a lot of energy in the form of biomass; it’s just not usable to them. I built this process so that I can extract energy locally,” said Marsh, “We can make our own refinery in McBride so you don’t have to go to the tar sands and pick the energy up.”

Marsh formed BC Biocarbon, a research and development company now in its eighth year. He’s the Chief Technology Officer, the Chief Executive Officer and the majority shareholder. His other investors are mostly local and it is very much a mom and pop operation.

If you haven’t heard about it, it’s no accident. To date he has kept his plant and technology out of the news. Marsh knows his technology is not an economic silver bullet for his hometown and he doesn’t want it construed as such.

His company provides about five good full-time jobs so far and could eventually expand to 10. When a full size plant is built, it will most likely be built near a major city and part of its feedstock will be biosolids, dried sewage as a feedstock, instead of waste wood. The reason is simple: people are willing to pay him to take it and it supports the business plan.

Besides developing a new fuel source, creating an array of chemical products, and harnessing heat energy stored in biomass, the technology helps pull carbon from the atmosphere.

“We’ve just surpassed the highest levels of carbon in the atmosphere in the last about 5 million years. We know geologically we’ve never had carbon this high, nor have we seen it climb this rapidly. Ever.”

“The Donald Trumps of the world will argue say, ‘Well, it’s been higher than this in the past.’ Well, that’s right… There were no humans then. We’ve also had ice ages covering the earth. And we’ve also had it so hot that none of us could live here,” he said.

“We need to do something to pull carbon dioxide out of the atmosphere and there are lots of technologies out there.”

But Marsh said BC Biocarbon can do it cheaper and better and create an array of useful products at the same time.

BC Biocarbon already has a market for the char and it fetches above $700 per tonne from greenhouses who use it to supercharge their plants.

Marsh developed the technology on a bench-top to prove the concept. Next they built a plant the size of pickup truck. Then two more the size of a shipping container.

“You are never gonna fall on your face doing that,” he said. “You get every piece done and get it working perfectly, then you go on to the next stage.”

Now his machinations take up a roughly 5,000 square foot building. He can process one tonne of wood an hour and he has a plant design to process 25 tonnes per hour.

Marsh said there is a lot of pressure to build a $100 million plant, but he continues his step by step systematic approach. He is proving his method works to investors who would take the project to the next level.

From the road it doesn’t look like much, just a big shed with giant wood chipper at one end, but inside is a hulking mass of farm-fabricated machinery. It’s mostly unpainted steel, and dimensions and plans are still chalked on the exterior, but it sits alongside sophisticated and neat looking control systems monitored remotely on a small computer.

At the back of the shop are about 12 skids of biochar ready for delivery, tanks of unrefined wood vinegar, or cooled smoke, and under a table a collection of rare and valuable refined products distilled from it. 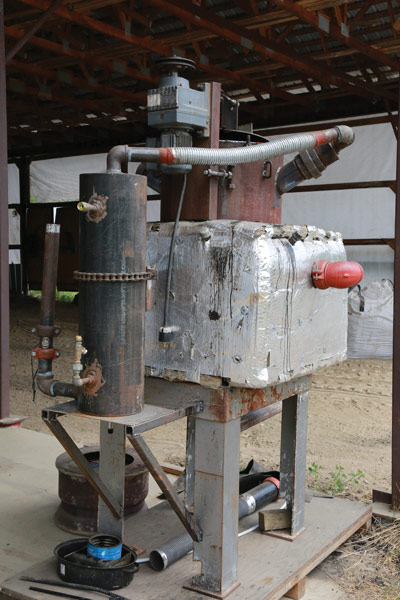 “Valemount and McBride are great places for people to think and produce interesting ideas that can go out to the world,” he said. “You can attract very talented people to come and help with these processes.”