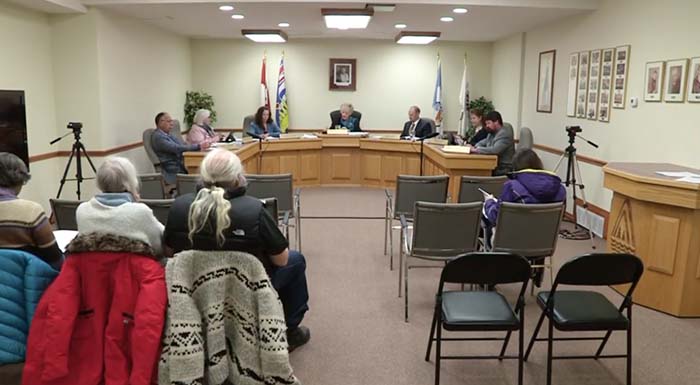 Village undertook a public hearing for a site specific Zoning Amendment Bylaw 780, 2018 to rezone John Crowley’s property at 1430 King Road from RR1 to RR2 to allow a secondary dwelling on the property and amend the Short Term Vacation Rentals regulations to permit both residential and vacation rental use on the property. There were no public comments or letters. Council gave third reading to the bylaw.

Council approved for councillor Salt to attend the AGM in Edmonton on April 6. The Mayor will attend by teleconference.

Council passed a resolution that the association advocate to secure funding from the federal government for a passing lane between Jasper and the western border of Jasper.

The Village of Valemount has been approved to receive $165,000 for an asset management plan from the $193 million federal Gas Tax Fund.

Council agreed to write a letter to the BC Premier John Horgan and the Public Safety Minister/Solicitor General Mike Farnworth asking to create a Human Trafficking Task Force and enforce the Federal Law in B.C., as being done in the rest of the country.

Council received the accounts payable reports for January and February 2018.

Council received information about the second annual festival. Councillors reported that Tourism Valemount is excited about the event and the Chamber of Commerce will be volunteering at the event.

Councillor Blanchette attended the public meeting for CBT’s Community Initiatives program as well as committee’s final deliberation meeting. She attended the Child & Youth Mental Health Committee meeting. This committee wants to know what the demographic needs and are wanting their input.

Mayor Townsend said she would have liked to see an application to CBT Community Initiatives for air quality monitoring equipment.

Councillor Reimer requested staff to seek clarification from the Ministry of Finance on the new Speculation Tax introduced in the provincial budget, which is 0.5% in 2018 and 2% in 2019 of the assessed value of a home. (This tax is not applicable to principal residences or long term rentals. The speculation tax will initially apply to the Metro Vancouver, Fraser Valley, Capital and Nanaimo Regional Districts, and in the municipalities of Kelowna and West Kelowna.)

Councillor Reimer asked staff to ensure that the Village is protected from issues related to marijuana use at work, with the legalization of cannabis. CAO Davey said that the Village’s Alcohol and Drug Policy #57 covers it and staff could run it past their lawyer to make sure it will be adequate.

Council closed the public portion of the council meeting to discuss three in-camera items related to litigation against the municipality and proposed provision of a municipal service.