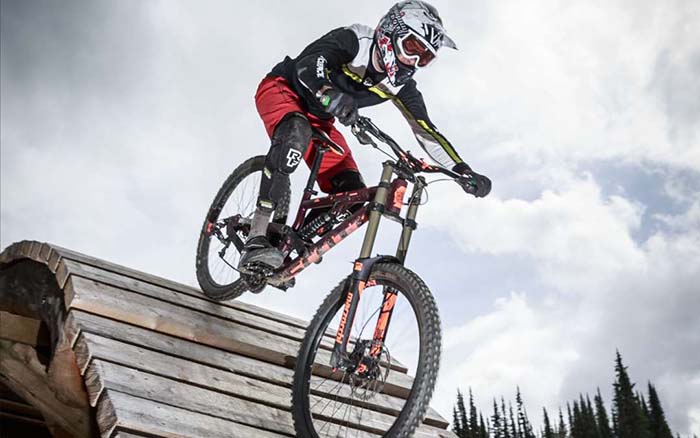 He calls himself the trail gnome. His name is Randy Pruden and he’s built, found, raked, swept, planned, preened, buffed and blessed more trail that you ride in a season. Now the trail gnome has been nominated for a once in a lifetime trip to the 8th Annual BC Bike Race dubbed the ‘Ultimate Singletrack Experience.’

It is a seven-day mountain bike stage race from the trail mecca of North Vancouver and the Sunshine Coast to its conclusion in Squamish.

Some 600 people get to participate and it’s already sold out, however Randy Pruden has a chance to win the Kazlaw Deserving Rider Award and take the trip representing his hometown of Valemount. As of press time Pruden is running neck and neck with another volunteer from Pemberton, BC.

Curtis Pawliuk nominated Pruden, who has earned his own hashtag: #NoRandyNoRide.

Here’s part of Randy’s write up:

Randy Pruden is hands down our local trail hero. A lifelong volunteer and advocate for local trail development, “Randy was getting out long before anyone else even knew there was somewhere to get out to.

Randy has embedded himself into every aspect of the creation of the Valemount Bike Park over the last few years. Right from his signature DIY signs, down to implementing and planning safety routes for better ambulance response times, the result of his efforts has been the development of a much safer and less confusing, formalized trail system.

Randy has easily become the most valuable asset to our bike park; hence the hashtag. Everyone from trail management to community partners, to local trail users and those from afar, know we wouldn’t be biking with as much ease and flow without all Randy’s thankless behind the scenes work.

On any given spring/summer/fall day, you’re likely to run into Randy on the trail system often on his bike but more often with an armload of tools. His favorite tool is the leaf blower! Even in 30-degree temperatures, you can bet Randy will be out there doing his best to contend with dry trail conditions, maintaining our trails like they were his own backyard.”

To vote in the contest, visit the BC Bike Race website, before March 6th, 2018!