The British Columbia Snowmobile Federation has honoured Curtis Pawliuk with the Pat Whiteway Award for Outstanding Snowmobiler of the Year.

It is the highest honour that a BC snowmobiler can get, according to Crystal Durnin, the program and marketing coordinator for the federation. The award is named in honour of Pat Whiteway who made a legendary contribution to snowmobiling in British Columbia.

“The award is for someone who shows an extraordinary level of dedication to improving the sport of snowmobiling in BC and who exemplifies the high standards and selflessness that Pat Whiteway maintained during his lifetime,” said Durnin.

Pawliuk was awarded the prize having been nominated three times by three separate individuals. Eight other nominees vied for the award.

Pat Whiteway was a legendary organized snowmobiling volunteer who passed away in 2007.  Durnin said Whiteway represented snowmobilers provincially, nationally and even internationally.

“He basically dedicated his entire life to organized snowmobiling,” said Durnin of Whiteway.

“We consider that the highest honour of our excellence awards. We choose it based on that same sort of undying dedication.”

There was a crowd to see it there too, as this year’s Annual General Meeting had 117 attendees, the biggest turnout in its history. 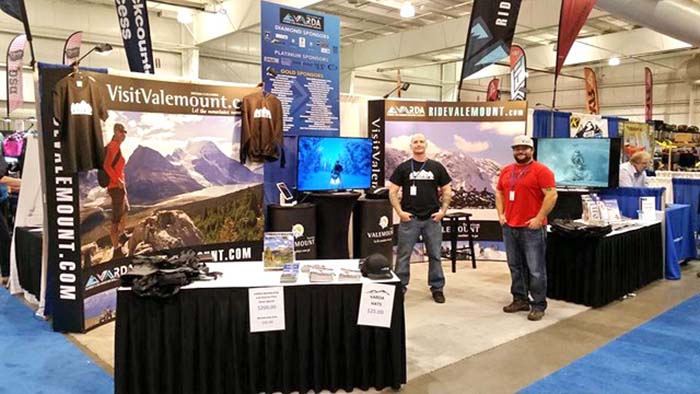 Pawliuk knew he was nominated for the award, but didn’t know who would win.

Pawliuk said the award inspires him to keep working.

“If anything, it kind of rejuvenates a person. It’s nice to know people see the hard work you do,” he said.

He said that as a relatively new activity, mountain snowmobiling is evolving every day and he plans to continue to be involved in pushing for more safety, better stewardship and land use.

Pawliuk isn’t afraid to tell it like it is. He has been known to criticize sledders when he sees them acting carelessly and endangering themselves and others.

He said that is what people remember.

“Nobody remembers the vanilla stuff,” he said, with a chuckle. “In order to drive change you have to make yourself heard.”

All three of Pawliuk’s nominators referenced his extensive work promoting safety in the backcountry.

In addition to Pawliuk’s award, the organization he manages, the Valemount and Area Recreation Development Association, won this year’s award for Outstanding Snowmobile Tourism Promotion and Development.

“I think VARDA has done a very good job of advertising Valemount as a destination,” he said. “We work hard to maintain our product to a high standard.”