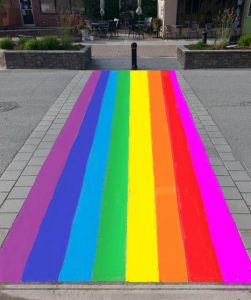 Mandy McMinn and Gail Burbidge are hoping Valemount will become the smallest community in BC to boast a rainbow crosswalk.

“It’s not just a representation of the LGBT community,” McMinn told the Goat. “It will represent the concept of acceptance. It shows that we are not pushing people away and we’re accepting of everybody.”

McMinn says she has been mulling over the idea for more than a year. Over a dozen crosswalks have been painted in BC communities to represent acceptance towards the lesbian, gay, bisexual, trans, queer and 2-spirited (LGBTQ2) community.

Last summer, the Council of Princeton B.C., population 2700, passed a unanimous vote to paint one of their crosswalks with a rainbow pattern.

Princeton Mayor Frank Armitage says the thinking behind it is there’s been a societal change.

“Society has decided on a very broad and big basis that we’re going to acknowledge these good citizens and on this basis Council made their decision.” he said. “I’m happy to say that across the community we were totally supported,”

This past month, Smithers unveiled their crosswalk. Other communities with rainbow crosswalks include Terrace, Masset, Castlegar, Vancouver and Victoria.

McMinn, who is just over 50 years old, says she has faced a lot of judgement in her life because of her sexual orientation. She says there is still a lot of homophobia in the world.

“I still face it to this day, but not as much as when I was young when I came out. Let’s try to make a little easier and more accepting by doing this crosswalk.”

She says it can be more difficult for LGBTQ2 people to come out in rural locations. 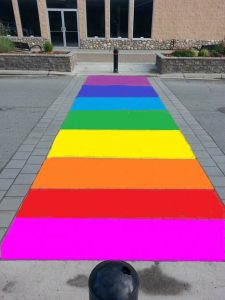 “In the rural areas like we live in, not everybody feels comfortable in coming out in their sexuality and being themselves amongst people they’ve known since they were tiny.”

That said, McMinn says Valemount has been the most accepting place she and her spouse Burbidge have lived; it influenced their decision to move here from the UK.

“Hopefully if we were to put something like the rainbow crosswalk in, people wouldn’t feel as though they wouldn’t fit in if they moved here,” she says.

McMinn was scheduled to make a presentation to Council at the Tuesday, June 28th regular Council meeting. There was no action item for Council associated with the delegation.

In a letter to Council on the same meeting agenda, Bobbi Roe of the Valemount New Life Centre church, says she hopes the decision over the crosswalk is made “after having given the public an opportunity to express their opinion.”

Roe says the rainbow means different things to different people and a rainbow crosswalk should be inclusive of every group.

“As I see it, painting a rainbow on the crosswalks as requested is a proclamation of support for one group of people, which will cost the Village in terms of materials, staff time and wages.”

“If this request is considered for approval, then it should be inclusive of all groups or organizations that claim the rainbow as their symbol.”

Roe’s letter was filed as an action item, meaning Council will make a decision on the letter’s contents.

McMinn says she is only asking for the Village’s cooperation to help make sure the crosswalk is up to spec, and is not asking for money. She plans to fundraise the cost of the paint and painting.

McMinn says she already has 40 signatures from Valemount residents who are in support.

She doesn’t expect the crosswalk to happen right away, but she hopes council takes the time to consider it.