On the sill of a Dunster Schoolhouse classroom window, several potted plants lean towards the sun. Their plantlets hang down searching for a place to root.

This month, the Dunster Fine Arts School Society will send the final mortgage payment to the school district for the purchase of the school.

Six years ago, the Prince George School District voted to shut down the K-7 Dunster Fine Arts School and send its 27 students to McBride or Valemount elementary schools. The two-room schoolhouse had once had as many as 50 children in its walls.

The district cited low enrolment and the benefit those children would have in McBride and Valemount schools which were dipping in enrolment. Dunster enrollment itself had held steady at around 30 students for the previous decade.

That fall, seven students attended homeschooling classes in a bus and canvas tents outside the school building. In October 2010, the Society purchased the building and 3-acre property from the school district after eight months of negotiations.
The school district told the Society that if they found 20 new children – either home schooled kids, kindergarten students or new arrivals – then they would provide a teacher for the 2011-2012 year. But they could not find 20 new children. A year after the school closure, many children had already settled into new classrooms in McBride or Valemount. Some families moved away to avoid the hour-long bus ride from Dunster to McBride.

But despite having no school district classes in the building, the school has remained a centre for learning and culture. The Society has changed its focus to marketing “The Dunster Schoolhouse” as a community learning hub – one that offers computers, workshop space, a gym, sports field, camping facilities and playroom. 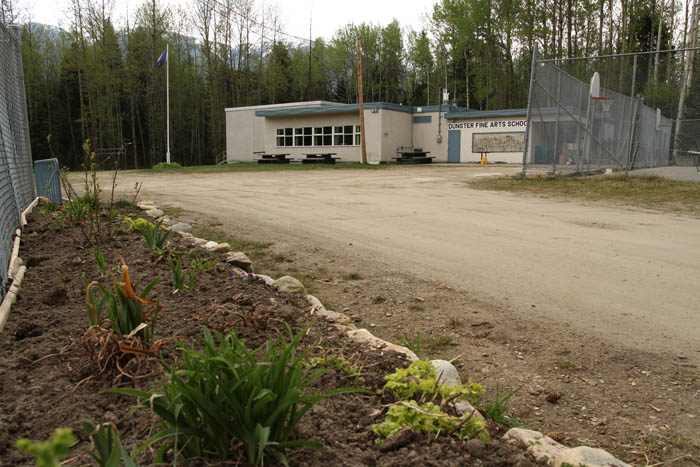 Last Friday, Chantal Swets and fellow Society board member Pete Amyoony were adding laminate flooring in the expanded kitchen. The kitchen now looks out onto a huge play room where parents come weekly with their children for play group. It attracts families from McBride and Valemount as well as locals.

In some ways the property is used more than when it was a school, says one Society member. There are workshops and conferences. Each month the school hosts a band that helps raise money for its mortgage. The learning happening inside the school walls is not just for the schoolchildren during school hours any more.

“I always argue with people on this,” says Amyoony. “It’s still a school in the true sense of the word. It’s not controlled by government and bureaucracy. It is a community school.”

So how did it happen? How did a community of 300 people – and a handful of dedicated volunteers – buy back their school and create a new centre of learning?

The fundraising is relentless and community support – both from individuals and organizations – has been huge, people will tell you. As they argued so many times to the school district during those dark days six years ago, the school is the heart of this community.

For a group that challenged the school district for months to keep the school open, staged an occupation of the school, offered school in tents beside the building, and finally bought the school and paid its bills, it’s true what Society member Irma Brownlee said a few years ago: “There’s lots of learning going on.”

Piano lessons, movie nights, Ukrainian Easter egg painting, apple grafting, and guitar lessons are some of the things that have already taken place in the building.

A new wheelchair ramp makes the school bathrooms accessible. A new shower room will make the school a great camping site. They have a new barbecue and ride-on-mower. They have talked about creating an elder hostel and a youth hostel, among other ideas. The sports fields have also seen lots of use.

Cedars Christian School’s Grade 7 class in Prince George has been coming to Dunster on an annual 3-day camping trip for the past three years where they hike at Mt. Robson and in Dunster. They tent on the lawn and use the washrooms and kitchen inside.

Swets says her dream is to have seniors housing built on the perimeter of the 3-acre property. The housing would be close to the Dunster Schoolhouse and Dunster General Store and the post office.

“It’s something for the community to use for years to come, rather than have it boarded up or derelict or bulldozed,” Amyoony says, adding that the bulldozing was a real possibility when the school was shut down.

The fear then, as now, is that no school will deter new families from moving in.

The last $485 monthly payment on the $43,760 bill is 1.5 years ahead of schedule. That bill doesn’t come close to reflecting the added value the community has put into the property since the purchase. Numerous grants have allowed renovations – a shower and larger kitchen for example – grants totalling more than $100,000. Not to mention the money needed for ongoing maintenance costs of electricity and propane – costs as large as the mortgage itself.

Now, any extra money fundraised will go towards long-term maintenance and facelift projects – the water intake and septic are two such projects.

“There’s lots of upgrades to be done,” she says.