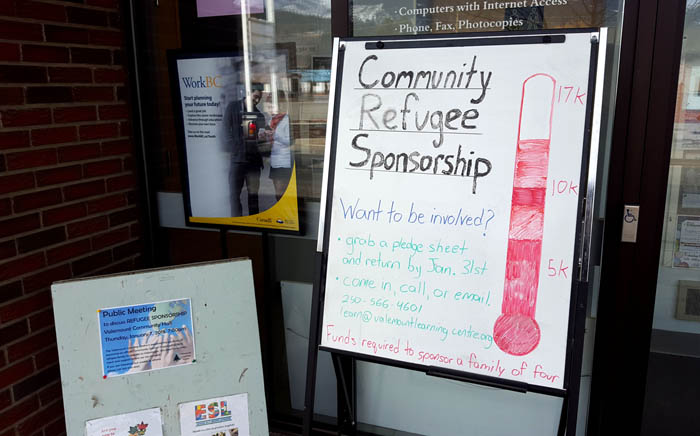 The Valemount Learning Centre is moving ahead on a plan to bring a Syrian family to Valemount.

While $4,000 short of their goal, the Learning Centre board is confident they can raise the rest is short order, says Jared Smith, ESL/Literacy Coordinator at the Centre.

The Centre plans to apply through the blended visa office-referred program, meaning the government kicks in some of the expenses.

A family of four is the goal – which means community has to come up with $17,000 and federal government will chip in $10,000 of living expenses for the first year of living in Canada.

“They won’t receive our application until we can prove that,” Smith says.

So far $13,120 has been pledged towards the Valemount refugee resettlement, though Smith points out that money has not yet been collected.

Still, he is confident that they can raise the nearly $4,000 remaining through additional fundraisers, and hopes to have the last funds within a month or two.

He says several people have said they want to host fundraising events.

The Learning Centre is opening a bank account for people to donate the money they have pledged.

He says the community support has been more than just financial. On the pledge sheet there was a spot for volunteer pledges.
“There were a lot of people who said I will donate time to help the family do this or that task.”

Other people said they could provide temporary accommodation when they first arrive, before a permanent dwelling is found.
“There are always people who are wary of the idea, but overall the support has been really positive.”

The refugee family would be selected from among the most vulnerable refugees awaiting placement, according to the Canadian government.

Once the application has been approved, Smith says they will set up a collection location for kitchen items, furniture etc.

He says if they don’t raise the 17,000 they can always re-adjust their target from a family of four to a smaller group.

“I think that would be a bit of a shame,” he says, however. “I wouldn’t want to bring just an individual here; I think they would be too isolated.”

He adds people need to understand that the family may not remain here permanently. That said, if they leave before the year is over, the community would no longer be on the hook for their expenses.

Pledges at this point are not tax deductible.

Once the application is submitted and approved, Smith says they will work on the settlement plan – in other words, how the community will help them integrate.

“It will be more of a community thing and there will be different ways to get involved.”