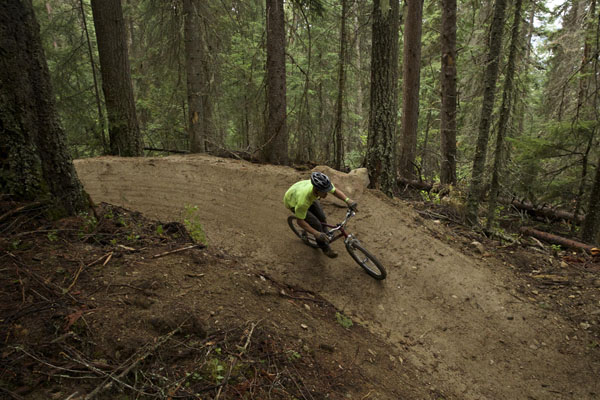 Photo: Danny Roberts – Mountain bike trail construction in Valemount over the spring and summer completed up to Phase 2 and some of Phase 3 of the Five-Mile Hill mountain bike and hiking trail system. Residents and members of McBride's Robson Valley Mountain Bike Association have been at work on building trails as well, after receiving provincial approval for Phase 1 of a trail system just 3 km from McBride.

Big anniversaries and milestones: CBT celebrates 20 years; Robson Valley Support Society celebrates 35 years; Terry Fox’s three siblings, Fred, Darrell and Judy, and other family members commemorate the 35th anniversary of Fox’s attempt to run across Canada with a hike to the summit of Mt. Terry Fox, just north of Valemount; Valemount Volunteer Fire Department celebrates 50 years; the Valemount Legion commemorated the 65th anniversary of the Canoe River Train Crash; and the McBride Farmer’s Institute and the community of Dunster both celebrated 100 years. Valemountain Days did not run, but some of the traditional events were held anyway, like a ball tournament, dance, and street party on 5th Avenue.

Castle Creek Hydro opens 35 km outside McBride. The $20 million run-of-river project is expected to produce six megawatts for 10 months of every year, sold directly into BC Hydro’s grid. The company said it was working on a deal for BC Hydro to power McBride directly in case of a power loss, rather than relying on the expensive diesel generators currently used.

McBride Council meetings are now recorded and broadcast on YouTube. Council fires the Village’s Public Works supervisor and is challenged by the CLAC union who were in discussions with Village staff about forming a union. The dispute is settled out of court, and Village staff vote to join CLAC. The Village also loses its Chief Executive Officer and Economic Development Officer, followed closely by the resignation of the Deputy Administrator and Treasurer. Councillor Robert Callaghan also resigns. Kelley Williams is hired as the new CAO, and in September, Rick Thompson, who previously served on Council and lost in the 2014 election, is elected to the vacant Council position.

Valemount Council authorizes an organizational audit, which shows the Village is well run, but highlights an issue between the Chief Administrative Officer and some members of Council. Council fires its CAO in late July, and Intern Danielle Dysserinck has to leave as she no longer has a mentor (requirement of NDIT sponsorship for the position). Council hires Ken Weisner as interim CAO, whose term is expected to be up in mid-January. Council is considering allowing remote participation in Council meetings. Anne Yanciw, former CAO for Valemount is hired in Smithers. No word yet on a new CAO for Valemount.

Forestry: The long-awaited apportionment decision for the Robson Valley Timber Supply Area was released in April, including an increase in allowable cut for potential Community Forest Agreements, and a new category offering 25,000 cubic meters for "First Nations Woodlands Tenure." The decision follows the new annual allowable cut of 400,000 cubic meters announced in May 2014, down from the 536,000 limit set in 2006.

MCFC The board of the McBride Community Forest Corporation fires manager Marc Von Der Gonna, who has been manager since the Community Forest’s conception. The board, currently made up of McBride Council members, hired consultants B.A. Blackwell and Associates and Susan Mulkey of the BC Community Forest Association to review operations and governance. They halted logging in September when they realized the MCFC had gone over its 5-year cut limit, and the halt contributed to the lay-off of local mill workers. The Board, on the consultants’ recommendation, did not hire an interim manager, choosing instead to be guided by their consultants; no word yet on the search for a new manager. By November, the board announced plans to do some logging this winter. They’ve also recruited a panel of local residents to help review the potential agreement to purchase some of Carrier Lumber’s volume in the area.

VCF The Valemount Community Forest hosted a public meeting about the potential deal to purchase some of Carrier Lumber’s license in the southern part of the Robson Valley, and to garners support to convert it to a new community forest license. The deal was submitted to the Ministry just before Christmas for final approval.

Doctor shortages Physician vacancies and the retirement of Dr. Michael Jackson at the end of March lead to doctor shortages and reduced operations at the Emergency department at McBride hospital. Doctors and staff from the Valemount Clinic have been helping out, and one new full-time physician was expected to start in September.

Valemount Glacier Destinations The proponents of a year-round skiing and sightseeing resort just a few kilometers west of Valemuont held their own open house in the spring, then another joint open house with the Province and the Regional District in November, after the province accepted the finalized master plan in the fall. If approved quickly, the proponents hope to start construction in 2016 and aim for an opening on Canada Day 2017 (Canada’s 150th anniversary).

Mountain bike trail construction in Valemount over the spring and summer completed up to Phase 2 and some of Phase 3 of the Five-Mile Hill mountain bike and hiking trail system. Residents and members of McBride’s Robson Valley Mountain Bike Association have been at work on building trails as well, after receiving provincial approval for Phase 1 of a trail system just 3 km from McBride.

Geothermal It is still in preliminary discussions, but Criag Dunn of Borealis Geopower says the Chinese government is interested in investing in geothermal power, and his project in the Canoe Reach, just south of Valemount might fit the bill. Geoscience BC study shows how low-cost geothermal electricity can be, including the Canoe Reach, though Dunn and the Canadian Geothermal Energy Association both say the costs will be much lower than the report says.

Valemount’s new youth centre V-crew opens in the old Valley Sentinel office. Its future is uncertain as the grant money runs out in March.

Trans Mountain Pipeline Expansion The National Energy Board delayed its recommendation on the project twice because of potential or perceived conflict related to staff and board members at the NEB. If the project is approved, Kinder Morgan announced it would contribute $185,000 to projects in Valemount, including $80,000 for the mountain bike park, $50,000 for education funding for programs related to the pipeline industry; $50,000 towards the water intake project; and $5,000 to fund a consultant to update the Village’s Emergency Plan. The NEB has released its draft conditions for approval of the project, and Trans Mountain has submitted its final written argument. The deadline for a recommendation from the NEB is now May 20, 2016.

McBride’s Library/Museum Plans for moving the Library and Museum are progressing. Resident and patron Vernon Pawloske biked and hiked 200 kilometers to raise money, just one of many public efforts to support the organizations and the move. The Museum board, with the support of the Library board, bought two vacant lots next to 521 Main Street, the location preferred by both boards. The Regional District approved a feasibility study to look at creating a taxable service area which also concluded 521 Main Street is the best and cheapest option. The proposal is expected to go to a public vote in spring 2016. The Library also signed an agreement to use 521 Main Street over the winter.

SD57 The teachers’ strike of 2014 is over, but SD57 is still feeling the pinch of funding shortfalls. The Board of Trustees, elected in November 2014, hosted 5-year strategic planning sessions in the spring and then more sessions on rural education in the fall. Local governments have called for better rural representation on the board of trustees.

Simpcw First Nation elected Fred Fortier as Chief in the spring. He and the new Council were sworn in on June 1st. Fortier resigned in late July. Nathan Matthew, who has previously held the position of Chief for several terms, was elected by acclamation on Sept. 20th.

Kinbasket Reservoir was higher much than normal over the winter, then peaked much lower and earlier than usual in the summer. Amid drought conditions in the southern (US) portions of the Columbia Basin, Kinbasket reached its maximum elevation of almost 2464 feet over 11 feet below normal full pool on July 15th.

Meet and greet/money – Federal and provincial representatives made some surprise announcements of funding at a planned meet-and-greet in early July. MP’s Cathy McLeod and Bob Zimmer and MLA Shirley Bond announced $235,000 each from the federal and provincial governments for Valemount sewer upgrades, with the rest of the estimated $705,000 for the 5th Ave lift station to come from Village coffers. Federal funding of $436,000 for salmon restoration in Swift Creek was also announced.

202 Ash Street logging of a "community" forest, actually part of a large private lot in the centre of Valemount, received both public complaints and praise. Rezoning for two portions of the lot to accommodate townhouse development was approved in the December.

Affordable housing The Village of Valemount has commissioned a study of housing needs and demands, with the report expected in January 2016. The developers of 202 Ash Street say their planned townhouses will be the beginning of affordable housing for the Village. The Regional District is also considering allowing secondary suites (already allowed in Valemount).

Ancient Forest a park? A plan by the province, the Lheidli T’enneh First Nation, and the Caledonia Ramblers to better protect a unique inland rainforest between McBride and Prince George is supported by many, but meets with resistance from some McBride residents. The consultation period was extended, and an additional meeting held in McBride. No word yet on a final decision.

Skills and labour shortage is predicted for the Robson Valley within the next 10 years, even without any major projects, says a report commissioned by Venture Kamloops. The report recommends a regional workforce strategy and increased skills training.

Refugee sponsorship in wake of the growing crisis in Syria, locals in McBride and Valemount host meetings to gage support and see if services are available in the Robson Valley to consider hosting refugees.

Awards for The Goat Celebrating 5 years in business in 2015, the Goat also receives provincial and national awards for Newspaper Excellence.