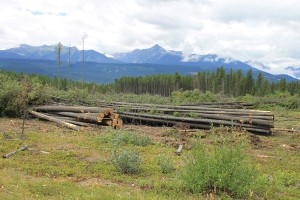 An application to rezone two lots on Ash Street to allow for apartments or townhouses has received early approval from Council. Valemount staff confirmed it is tentatively scheduled for a public hearing in early December, if the proponent can meet the Village’s requirements.

The staff report to Council at its Nov. 10th meeting says Shirley Sander, acting on behalf of a numbered Alberta company, is seeking to develop up to 46 townhouses on two sites that face Ash Street.

The 22-hectare property at 202 Ash Street was purchased by 1851020 Alberta Ltd in the spring of 2015. Much of the property was logged over the summer, creating at least a temporary stir for neighbours and residents over the loss of the wooded area near their homes. Some areas of young trees were left for visual quality, and some residents were thankful that a potential fire and safety risk were being addressed. Just a week before logging began, one live pine tree blew down onto two vehicles in a nearby parking lot.

The property is currently zoned Residential (R1). According to the Village’s zoning bylaw 610 from 2007, R1 allows only single family dwellings and duplexes, including bed and breakfasts and secondary suites. There were plans at one time to divide the property into up to 200 residential lots, a development plan known as “Sandy Acres.”

The original report to Council for the Nov. 10th meeting said the application was to rezone the two sections of the property along Ash Street to R4, Medium Density Multiple-Family Residential, which allows multiple family dwellings, apartments and townhouses. The maximum density for R4 is up to 30 dwelling units per hectare. The amended report presented to Council at the meeting changed the application to R5, High Density Residential, which is primarily intended for apartment buildings.

Two lots currently along the same section of Ash Street are already zoned R5; one opposite Valemount Secondary School (known locally as the CN Apartments) and another currently vacant lot, between the two proposed new lots.

The report says staff supports the proposed rezoning of the two sites, but notes a number of issues should be considered including: the alignment of future roads (to provide for the continuation or projection of existing streets in the area); acquisition of parkland and/or trails (which could connect with a proposed trail system through Village-owned property next to the high school); the impact of high-density residential development on the Village’s water supply calculations, given the limited reservoir capacity; input from the Village’s Fire and Rescue Department, as multi-story townhouse and/or apartment developments may pose new challenges for fire fighters.

If the zoning amendment is approved, the report says other technical matters will need to be addressed by the proponent and the Village before development starts, such as: legal surveys and site plans; environmental site profile for the parent property; dedication of roads and right-of-ways and agreements to fund construction of required roads; and water and sewer upgrades and extensions and agreements to fund construction.

The report notes the proposed rezoning would hep facilitate development of the two sites and potentially other parts of the parent property; would promote development of townhouses in Valemount, which are not currently part of the local housing stock; attract investment to Valemount; and broaden the Village’s tax base.

Sander told the Goat she would be happy to share some of the building designs after third reading of the zoning amendment.

The Village has budgeted funding to update the Official Community Plan (OCP) and zoning bylaws in several recent 5-year budget bylaws, but has not yet started the formal process to update the OCP. The OCP was last updated in 2006.