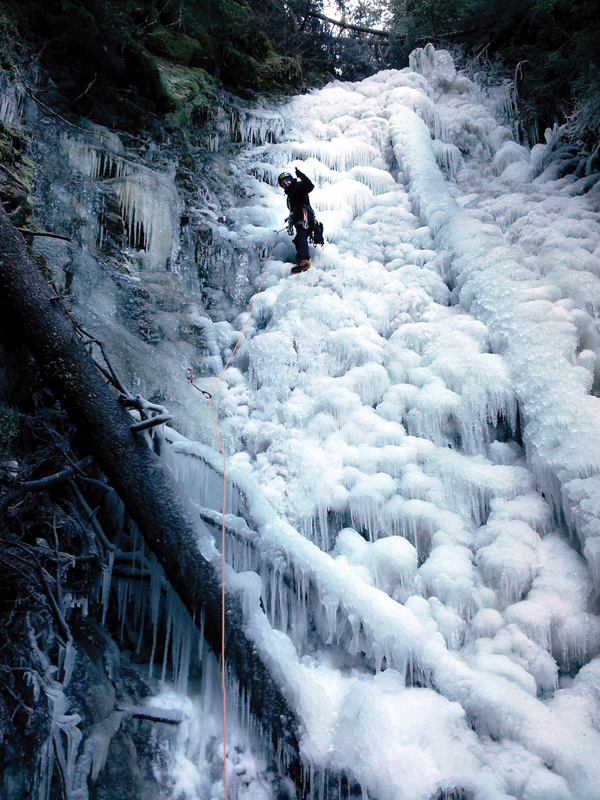 Since the thirteenth of November I have been waiting impatiently to load my rucksack and head out on the first ice climbing trip of the season. It was on that day last year that I did one of the cooler first ascents I have ever climbed.

My ex and I drove out to the Ancient Forest trail from our home in Prince George. I had been training hard for the ice season, and the early cold snap had me hoping that the little waterfall up in the cedars might be solid enough to climb. We put on our climbing boots which had been warming by the heater on the drive and headed up the trail; it was -11. About half way down the boardwalk there is a small gap in the wooden railing and a sign that reads “Waterfall” when not covered by snow. This small trail winds its way through the giant cedars taking about twenty minutes to get to the waterfall. We were in luck; I could see the glimmer of the ice through the trees and howled in delight at the prospect of a virgin waterfall. We put our gear down just a few meters from the freshly formed ice. If we had shown up a day earlier I don’t think it would have been climbable. My ex was doubtful and scared it might fall down, but having looked closely at the ice I could tell it would be strong enough for us to dangle up. This is an easy climb. Most healthy people could climb it with relative ease, but being thin and barely formed, it provided a fun challenge for me.

We put our gear on; helmet, harness, and crampons in that order. And I looked through my equipment for the shortest screws I had. I racked up a 10cm and a 13cm screw and grabbed my newly purchased “bulldog” which is basically a hooked ice tool blade that one pounds into the ice and clips to the rope. My ex put me on belay and I set my tools in the soft ice. We had left the truck at 1 pm and the temperature was dropping. I climb over some ice smeared tree trunks and through the first few moves and find a suitable spot for my first piece of protection. The sharp steel teeth of the hollow screw bite easily into the ice and touch rock at about 11cm, leaving 2cm of screw protruding from the ice. Pulling a thin sling over my shoulder I girth hitch it to the tube of the screw and clip it to my rope; a marginal piece of protection at best. I feel confident in my abilities and climb through ten more meters of ice, some parts of which are so thin I can see the water flowing on the other side.

I find a pool of solid ice about halfway up and pound my “bulldog” home into the only fat ice on the whole climb. Working my way up the center of the falls I find some solid tool placements in a large tree that has fallen and frozen into the face. I make my last screw placement and climb around the open pool at the top of the falls to the large hemlock which I use as an anchor. Putting my ex on belay I watch as she makes her way up the hundred foot falls, cleaning my gear as she goes. The temperature has dropped dramatically; I can feel the cold through my softshell jacket and my thin gloves. When my ex arrives at the top she has tears frozen to her cheeks. My altimeter reads -17. I give her my thick gloves and set the ropes for our rappel. On the bottom, we quickly pack up and high tail it back to the SUV.

Two days later on my birthday, a friend and I found solidly formed falls. It had doubled in thickness in only two days! We climb to the big hemlock and put a rappel line at the top of the falls. We solo and rappel the climb twenty times apiece that day. Best birthday ever!

There is a nearby giant cedar called “Tree Beard”. In keeping with the Tolkien theme I have decided to call the recorded first ascent Mirkwood Falls WI2. Due to the huge snowfall in the Ancient Forest this little gem is only there for a short time and only in the right conditions. By the end of the month it was covered in snow and soaking wet feeling more like Scottish turf climbing than ice climbing. When I told local ice veterans about the falls they laughed at me until they saw the photos. When I showed up with a partner on the 23rd they were there and they concurred that the climb was easy but super fun which is all we are really after!

This is Ross Ballard wishing you happy holidays and safe adventures!