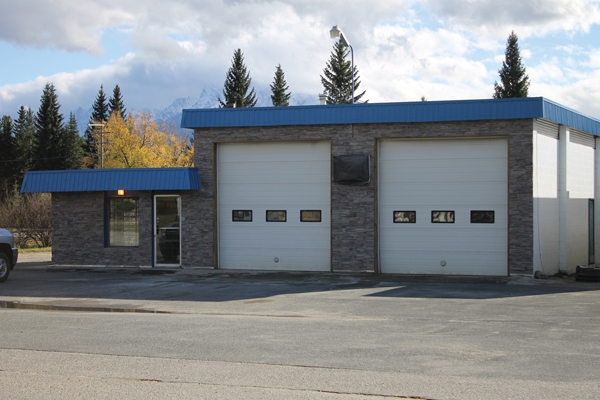 A towing company which operated primarily out of McBride in the past has received temporary approval for a compound and modular building recently placed on a property on 5th Avenue, former home of Monashee Motors.

Centrefire Holdings is leasing the property from TomCat Enterprises, who recently received a development permit for work to improve the facade. The building has been faced with new rockwork and will receive a new peaked roof with help from the Business Facade Improvement program from Northern Development Initiative Trust, coordinated this year by the Valemount and Area Chamber of Commerce. The old Greyhound transfer trailer that used to sit alongside the building has been removed.

The Village issued a business license to Centrefire Holding in September for the towing and small repair service, which are both consistent with past uses of the property. However the company, doing business under the name Thunder Valley Towing, had not applied for permits to place two sea-cans (forming two sides of a fenced compound for storing towed vehicles) and a modular trailer at the rear of the property, facing 6th Avenue. The Village issued Stop Work and Do Not Occupy orders, so the business contacted the Village Office to apply for a temporary use permit.

In its application, Chris Fry of Centerfire Holdings apologized for the company’s failure to follow proper procedure. In a letter accompanying the application, Fry says they saw an opportunity to offer locals and visitors in the village easy access to towing, lockout and other services. All the other local towing companies are now located outside the village limits. The in-town location would provide close access to restaurants, accommodation and other amenities to stranded travelers, which is of particular importance to inexperienced and elderly drivers who are frequently the ones involved in these incidents, says the letter.

The letter says a secured compound and storage area for investigations of motor vehicle incidents is often required by RCMP, Commercial Vehicle Safety Enforcement and insurance companies, and having it centrally located is part of setting up a business plan that works for business and stakeholders. It says the modular trailer will be used as an office and lunch room, and will provide an important area for towing staff to store safety gear, get suited up or dried off and warmed up after a call-out, and a safe, calm setting to debrief after a recovery.

“Towers are part of the first responder team of stakeholders often dealing with difficult and traumatic incident conditions,” says the letter. “Post Traumatic Stress Disorder (PTSD) is not uncommon in our industry.”

At the public hearing on Tuesday Nov. 10th, no one made a comment on the proposal. The Village did receive one written comment, in opposition to the proposal. The letter from a neighbour listed concerns about the ICBC requirements for a compound, whether the trailer would be used as staff accommodation, and questioned the need for another towing company in the community.

Council passed the amendments, and voted that a two-year temporary use permit be issued to Centrefire Holdings.