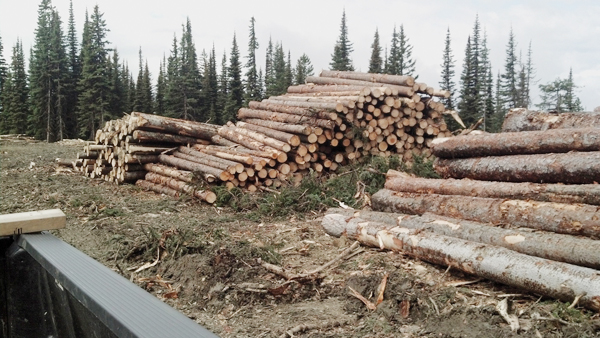 The McBride Community Forest Corporation seems to have gotten far less money for its wood than it should have, based on interviews with local log buyers, loggers, and truckers.

At a public meeting this summer, then-General Manager Marc Von Der Gonna disclosed the numbers behind a big part of the Corporation’s business. Local loggers could buy the right to harvest and sell spruce from the Community Forest for the equivalent of between $25 and $28 per tonne under its “small market logger program.”

The “small market loggers” have to bear the cost of cutting down the trees and shipping them to the mill, in addition to paying the Community Forest its share. They may have also had to build roads to the trees they wanted to log, which would be an extra expense. Experts’ highest, worst-case estimates for the loggers pegged those costs at $32 per tonne for trucking and $25 for the logging ($57 total). Low, best-case estimates were $20 and $22 ($42 total), respectively. Almost every log buyer, logger, and trucker would only speak on background for fear of compromising their business.

Those hypothetical margins are so large because spruce prices have been up—the Community Forest’s biggest buyer, Carrier Lumber, paid out $105 for a tonne of spruce in March, according to a document local woodlot owner Mike Monroe shared with the Goat.

That’s left critics frustrated that the McBride Community Forest Corporation didn’t charge loggers more for access to its trees. A logger paid Monroe more than $50 per tonne for his spruce under a sub-contract. The logger logged and hauled the wood and paid Monroe up to double what the Community Forest netted.

The McBride Community Forest Corporation didn’t charge more because it didn’t change its rates based on the market price for the wood, said former-Mayor Mike Frazier, who was also a director on the Community Forest’s board. It still charged $25 to $28 per tonne when spruce was worth considerably less, he said.

“What if the market was only $65 a tonne?” Frazier asked.