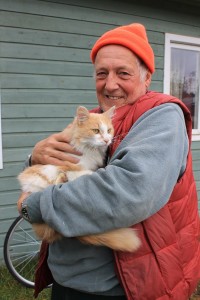 Two men, one with a beautiful orange and white, longhair cat in his arms, walked into our office on Friday Oct. 31st.

“I’m looking for Korie,” said the one with the cat.

“I’m John Jensen. We thought you might know who this cat belongs to.”

I hadn’t met Jensen in person before, but he called me in late September to find out if I knew anything about the state of the West Canoe Forest Service Road, because he and a group of hunters wanted to come hunting again. He told me the story about his group getting an “armed escort” away from their hunting camp around 35 kilometers down the west side of Kinbasket Reservoir the day before John Beuhler was shot and killed.

After the shooting on Sept. 17th, where Beuhler’s daughter Shanna also sustained multiple gunshot wounds, a Conservation Officer tranquilized and removed five of six German shepherds. Sergeant Rory Smith of the Conservation Office would not comment on what happened to the sixth dog after the shoot-out, because he said it was part of the RCMP investigation. But neither local RCMP nor Inspector Ed Boettcher, Officer in Charge for “E” Division Communication Services, have responded to my questions about the dog. It hasn’t been made public before, but I knew Beuhler’s daughter, Shanna, also had a cat.

I wasn’t 100 per cent sure the cat these men were holding was Shanna’s, but sure enough – like 99.9 per cent. They said they wondered if it might be hers, having followed the news stories. I told them the sixth dog is believed to be down there still, and was recently spotted. They too though they might have spotted it, but at the time thought it was a wolf.

When they found the cat, Jensen and his party were again hunting and camping down the west side, and were exploring the roads. They saw a cougar cross the road. They stopped and quickly realized it was not a cougar, but a house cat. She sat in the ditch, and came to them when they called. Though very thin, she did not appear to be injured, and was very friendly and loving. They fed “Lucky,” as they nicknamed her, some grouse meat, and she slept in the tent with them, curled up next to Jensen’s neck and shoulder.

As we talked, Lucky roamed around our office, meowing a bit, rubbing against our legs. Jensen’s friend asked me if there is a sense in the community that people are relieved that a danger is gone, or if they think there is something wrong about the situation. I know for some people, there is a sense of relief that someone who appeared to be a danger to the community is no longer a danger, and many are relieved that there was no injury to our local police force. There are some who believe all of the dogs should have been killed, if they are a danger to people.

Think about this – if the dogs were dangerous, why were they released to Shanna Beuhler back in June after police seized them from her father after a stand-off? And why was one of the five released to Shanna in early October? I recognize that dogs can be trained to be aggressive, to attack. Even the RCMP does that with dogs. No one suggests we should kill RCMP dogs after they’ve attacked on orders from their master. Why is it different for these dogs?

Jensen and his friend agreed to leave Lucky with me; I think they too wanted to see her back with her family. I wanted to get Lucky back to Shanna, but I also knew that local people would help look after her. I called a friend who I thought might be able to take her, at least for a few days. Sure enough, Lucky seemed to love dogs, but was not quite so enthused with other cats.

But then a strange coincidence happened. I contacted a source and learned Shanna and her mom and lawyer were in Valemount that same afternoon. I had never met Shanna before, and I didn’t know what I pictured. But when I met her and her mom in the coffee shop, all I saw was a young, beautiful woman, like any other young woman you might see sitting in a coffee shop. The only reason I knew who she was is because I recognized her lawyer. She is still recovering from three gunshot wounds, but you wouldn’t know it from looking at her, except that she moves a little slowly and stiffly, and she is not supposed to lift anything. I know she has been through a lot of trauma, but her big bright eyes met mine when I spoke to her, and she responded softly, her whole being exuding nervousness, but a willingness to face whatever comes – bravery.

My friend was concerned at first; she wanted the best thing for the cat and had no idea if Shanna and her mom could look after it. But when I brought the three of them to pick up Lucky (I can’t remember what Shanna said the cat’s real name is), my friend had no more reservations, and was happy to reunite part of this family.

There are still charges against Shanna Beuhler, and we have yet to find out the details about why and how her father died. It is something we all need to know, and I hope it will come out sooner than later, but I didn’t get Shanna’s cat back to her for a story. I wasn’t even going to tell it. But when I realized how much of an impact it had on me – and how proud I am of all the people who made it happen, John Jensen and his friends, my friends and coworkers for helping me, Shanna and her mom and lawyer for meeting me and trusting me – I realized I had to tell it. We are not a community and a society that is happy about a man’s death. We are a community and a society that is happy to reunite a part of a family, even if it is only a cat.