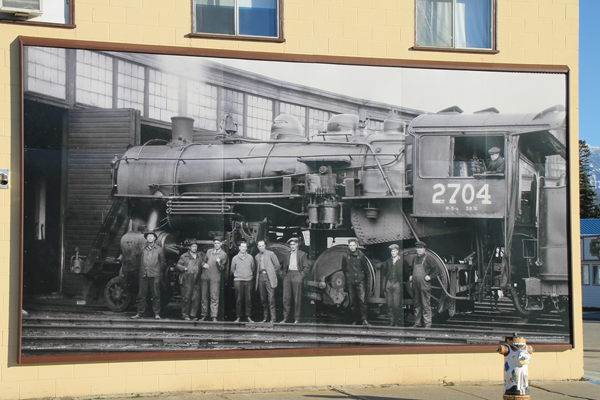 The new mural on the corner of 4th and Main Street. 1920’s Roundhouse Crew. The building improvements were funded by NDIT matching funds through the Village. The mural itself was funded by a funding application through Heritage Canada Cultural Grant for $3,000. The local sponsoring committee was the Robson Valley Cultural Council.

On Sunday we woke up to blue skies, crisp fresh air, magnificent scenery and excitement, chatter and congratulations and or messages of gratitude on social media. It is an exciting moment as we give thanks to those who have contributed so richly to the present and the past…and look forward with an eagerness to a new leadership team and I sincerely hope a positive tomorrow.

Only four years ago Kelli and I began researching McBride as a future home, with its clean air and spectacular scenery, so important to my wife’s health. We began first by looking at Bell Mountain Motel as a business opportunity and in pursuing that enterprise we visited the village a number of times. One of the first and lasting memories of those early visits was the friendly waves and welcomes from then unfamiliar villagers as we drove through town. The friendly hellos, ‘You’re new in town’ and other such entreaties as we visited stores for the first time. These comments were often attached to ‘Do you need a hand to find anything?’ or a simple ‘Welcome.’ I remember with fondness (and sadness) Al Miller who became our realtor and all the help he extended in those early days, and early relationships with Don and Diane Smith, Barbara Jackson. Fran Long and all the other good people at the Anglican/United Church who were particularly influential in helping us make the decision to choose McBride as home, and then in settling in.

I will never forget arriving about 6 p.m. and finding Barry Alexander, Mark Roth and Mike Earl who arrived simultaneously but unexpectedly to help us unload our three vehicles. But in truth the single thing that helped us to make the positive and life changing decision to move to McBride were the smiles on everyone’s faces and the friendliness…the genuine welcome as we visited and then moved here.

It is to be hoped that with the advent of the newly elected Village council and Regional District director that this legacy will be born anew and will continue to flourish. As kudos and thanks are being extended to the outgoing council for the legacy that they have left, it was somewhat ironic that my task was to take photographs of two changes to the village. First the new photo mural on the corner of 4th Ave. and Main St, and secondly to see the new ‘overcoat’ or exterior shell that has been installed on Syncra Wood Products facility on 1st Ave. Both are part of upgrades supported by the outgoing council and Regional District. Over the last few months, The Giggling Grizzly, Home Hardware, Home Houseware, The Historic McKale House Gifts & Used Books, Country Road garage, were all benefactors of grants that were completed and were supported financially by grant initiatives. New stores like Country Chic Beauty Salon and the soon to be completed Petro Canada station are also contributing to this new look to the village. Still more changes to the interior of AG Foods and the Robson Valley Indoor Market have contributed to this ‘new look’ of McBride.

Initiatives such as the Open Gate Community Garden, the continuation of the popular Farmers Market, (both of which get strong support from both villagers and other local residents), last summer’s spectacularly successful Pioneer Days which this year also included a ‘Show and Shine Car show along with the popular Horse Events. Perhaps the underlying message here was that the Elks couldn’t do it on their own…but with others from the community jumping in to help or take responsibility for a portion…the old traditions and some new ones could work well together and be successful. These activities most of all drew villagers AND those that live locally (and attracted visitors from some miles away) as our friendly faces had a chance to visit and enjoy each other and the events offered. Perhaps a glimmer of hope towards the future that McBride can become inclusive of its regional residents.

So to Mike, Rick, Irene, Raj, Lori, and Ken as we say ‘Thank You for your years of service’ can we also hope that you along with Loranne, Sharon, Bob, Ralph, Edee and Dannielle can join in the warm welcoming committee that makes McBride and area the friendly village that is so attractive to our visitors. A handshake and a friendly wave – our symbol of the future.