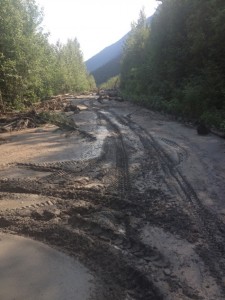 Whenever the Columbia Basin Trust comes to Valemount, the topic of a weir that would give us a permanent lake at the top of Kinbasket Reservoir is bound to come up in one conversation or another.

Kindy Gosel says Valemount is light years ahead – it may not look like it, but we are. He’s from Golden, and he knows that some Golden residents want a weir at their end, like some people in Valemount want one up here. But in Golden, many of the 5000 residents don’t know where Kinbasket is.

“People in Golden are far less connected to Kinbasket than you are here in Valemount,” says Gosel. Here, we have a sign on the highway, it is part of our tourism marketing plan and we have a marina association which also maintains forestry recreation sites – all things Golden is just starting to look at.

Some people want to start commercial development on the Golden end of the reservoir, and like here in Valemount, some people think a weir would be the answer. Gosel’s response?

“Don’t bring it to me. Whatever the cost, we know it is going to cost a lot of money, and if you can’t show me an economic value to doing it, I won’t look at it.” For Gosel and Columbia Basin Trust’s Special Initiatives program, it’s not enough to just say it will be the beginning of economic development.

But he does see value in building the potential for economic and commercial development, and he’s been working with a group in Golden to start three processes simultaneously, that together will open the potential for realistic development. One is looking at the process of land transfer – what does it take to be able to use crown land, and what are the steps necessary? The second is starting to maintain existing forestry recreation sites on the lake and getting some evidence that people want to – and will – use the area. The third is looking at upgrading the access road, also a forestry road like ours at this end. Theirs have been worn down past the point where grading will work. They’ve estimated it will cost $1 million just to put gravel on the road, although their access is quite a bit further away – something like an hour and a half from Golden, compared to 15 or 20 minutes for us in Valemount.

The Golden end of the reservoir has an even larger draw-down zone than ours. At low pool, Gosel says the huge area where the Bush and Gold rivers come into the reservoir is nothing but rivers and mud flats. That is around 100 kilometres from the tip of the lake at full pool. At our end it is only about 26.

“At low pool, that is all mud, and it is great for quads,” says Gosel. The implication is that is an opportunity for recreation and potentially tourism, because just about anywhere else, ripping through mud would be harmful to the environment. If there was a weir, that potential is gone.

Gosal says constructing weirs would have implications for the Columbia River Treaty as well, because it would affect the water flow and capacity of Mica Dam. And along with covering mud flats, weirs would also permanently cover archaeological sites and some existing wetlands and marshes, like the Valemount Peatland, which is a healthy ecosystem despite being covered in a couple feet of water for a short period each year.

But Gosal doesn’t totally rule out the possibility of weirs on Kinbasket. He says once the issues of acess, and ownership are figures out, and development starts happening – that will be the time to consider if users want to build some weirs.