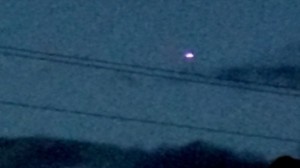 Chris Harder of Alberta recorded a strange light overhead from the A&W parking lot in Valemount on June 6, 2014. He says it flew right over his head, no more than 150 to 200 feet up, but it was already heading to the north by the time he got his recording device out, and the video shows the lights changing color as the thing flies off towards the mountains.

Harder told the Goat over the phone that it was “dead silent”, and that he was “dead sober” when he recorded it. The video was posted to a blog called the Okanagan Centre for the Study of Extraterrestrial Intelligence, where the question of it being a hoax, created using a “drone” – a type of remote control helicopter, often with four sets of propellers that is extremely agile – is debated. Harder doesn’t believe it is a drone, and the host of the blog doesn’t either.

“Unmanned aerial vehicles (UAVs) have been around and in use by the military for almost a decade, but for me, this video “tests” as true information about an ET craft,” says the host.

A recent recording of a strange light over the ocean near Peggy’s Cove, Nova Scotia, made CTV News. It was described as a very different light than what is recorded in Harder’s video, but the news story pointed out that one of the problems of identifying something in the sky is trying to figure out how big it is, because of there are so few reference points. It also said that cell phone still shots and videos don’t help, because the auto-focus won’t work – it constantly tries to readjust or find a contrast point.

In early April of this year, in various locations around Valemount, at least four of this reporter’s friends and I saw what looked to me to be the same type of lights as Harder recorded. Speculation on social media was that it could have been a remote control “quadracopter” which are available for sale at a couple local businesses. But when I saw it again on Thursday, August 21, it seemed much closer and bigger, though just as silent. If it was a drone, I think it is much bigger and more sophisticated than what I’ve seen for sale in Valemount.

Amid jokes and supposition on social media, a number of other Valemount residents say they saw the same light on Thursday, and one resident shared with the Goat two more videos of a similar light on two different dates this summer. Another resident said he saw something similar from his yard in Valemount 15 years ago.

Over the weekend, a visitor was reportedly taking videos of the Valemount area using a drone and a “GoPro” camera, a small video camera often attached to helmets, handle bars or dog collars to videotape adventures. The Goat has not yet connected with this visitor to ask if his type of device could be used to create the sort of lights recorded by Harder, and seen by other locals this summer, but we’ll keep trying.