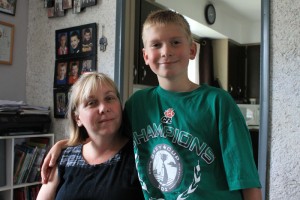 Accidents do happen. For the 17 years Jennifer Gordon Johannsen Scheller has lived in Valemount, she’s always stopped at one particular spot on the trail up to Kinney Lake, along the Robson River, to refill her water bottles. But last weekend, on a hot, longest day of the year, one small slip nearly cost her life.

On Saturday, June 21, Sheller and her two sons decided to hike in Mount Robson Park. They were trying to get to the campground at Kinney Lake, or at least to the tip of the lake, about 4.5 kilometers from the trailhead. The trail follows the Robson River, which flows from Berg Lake (named for the icebergs that fall into it from four glaciers), through Kinney Lake, to meet the Fraser about 20 kilometers away.

But at about two and a half kilometers in, they were running out of water. They stopped at a little beach just off the trail, a spot Scheller’s son Aubrey, who will be 10 next week, says they have stopped at for water every time they’ve gone on the trail. They all had to step over a fallen tree that extended into the water to get to the edge, and Kirby, Scheller’s younger son, was right on the shore at the upstream edge, where they usually refill the bottles.

“I should have waited for him to move out of the way,” says Scheller. “But me, being impatient, I went beside him. And as I was putting the water bottle in the water, my right foot slipped and went out from me and I landed on my belly.”

And then Scheller slid on a bigger rock, just like on a water slide, where you can’t stop yourself. She slid feet first, on her belly, right into the Robson River, which started to sweep her away.

Luckily that tree was there, at the downstream side of the beach area, and she grabbed it with her right hand. At this point, she still had Aubrey’s backpack in her left hand, with the water bottles, Aubrey’s camera and the boys’ Parks Passports with stamps from at least three trips already. She was trying to lift it to throw it to shore, but it was open, and water was gushing into it.

“I thought – you know what? Everything in that backpack is replaceable,” says Scheller. “So I just let it go.”

She didn’t want to stand up because she’s heard that is the worst thing you can do in rushing water, because your foot can get lodged, and the force of the river can drown you. She knew she wanted to stay up-river of the tree, because she wasn’t sure she could keep a hold of it from the downstream side. The water was fast and high, and she had no idea where she’d end up if she let go – Vancouver, maybe.

The tree had short little branches on it, and the water pushing her against the tree felt like being hit with a bag of potatoes, over and over.

Aubrey says at one point he saw the tree move and stuck his foot by it to make sure it wouldn’t swing out into the river. Sheller knew there were two people walking behind them, so she yelled to the boys to get back up to the trail. With the shock of the cold water and the adrenaline, she couldn’t hear her own voice, but Aubrey told her later he could hear her fine, although he hadn’t seen her fall in. He didn’t realize it had happened until he heard Kirby screaming “Mom, Mom!”

Scheller, with her voice catching, says Kirby was right there when she fell in; his face was the last thing she saw before she hit the water, and she knew he was very upset. He had reached out to grab her, and she remembers pushing his hands away, worried he might fall in too.

She knew if the boys got up to the trail, Aubrey could lead the people walking behind to her to help her out. But she was getting really weak from the cold, and she decided she had to get out, or she might not make it. She was in the water with only her face and the top of her head sticking out, and her own small backpack was weighing her down, though luckily she was wearing light summer clothing and not heavy jeans or bulky sweaters.

“I told myself I am not going to die today; today is not the day,” says Scheller, and she just started climbing, pulling herself along the branches to shore. She finally got herself to shore and back up to the trail. The two people hiking behind them just walked right by.

“They didn’t even look at me. I’m standing there dripping wet, I’m freezing, my skin is all red from the cold, and Aubrey says ‘Mom, you are bleeding.’” She had blood on her leg and arm, and she doesn’t know if those two people didn’t speak English, or if they just though she had gone for a leisurely swim, or what. But they just walked right by.

They passed about 30 people on their walk out, and although many people commented about their dog’s saddle bags, and that she had a lovely family, no one seemed to see her.

“Not one person asked me why I was wet, why I was bleeding.”

Scheller was going to stop off at the Parks office and report it to them but she just wanted to get home as quick as she could, and have a shower.

“I got a little bit of colour to me,” says Scheller, showing me large bruises up her right thigh and hip. She has them across her belly and arms too, as well as what she thinks are punctures from the tree branches, and her arms and chest are sore from pulling herself out.

Scheller has been going through a lot of emotions, at first being scared, and embarrassed she let something like that happen, especially in front of her children. But she realizes it was an accident, something that could have happened to anybody.

“I’m just thankful it wasn’t one of my kids,” Scheller says.

She knows it was traumatic for the kids too, but it was a positive outcome – they both saw her get out. On the way home, the boys wanted to have a little party to celebrate that their mom was still alive, and Scheller had her friend bring over some pizza. Half way through eating pizza, another little boy came to the door, and the next thing she knew, both boys were gone playing, so she knows they’re OK.

Aubrey says he’s proud of his mom, although he was clearly disappointed when she told him the park had run out of Park Passports. And he recognizes how dangerous water can be. He draws a sketch of the tree to show me how his mom climbed out. He’s still looking forward to his Grade 7 trip to Berg Lake, coming up in three years, and being able to point out to his friends and his dad, who is working out of the province right now, the spot his mom fell in.

“It’s a really nice spot,” he says, and there are lots like it where you can stop and fill your water bottle. On the walk back to the trailhead, he saw some other people stopping to do the same, and he said “I hope they don’t do the ‘Mom’!” It’s a new phrase now.

“Just that one foot, it just – it was this quick, it just slipped, and there was nothing to grab on to,” says Scheller. “Once you start going, there is no coming back.”

Wayne VanVelzen, area supervisor for Mount Robson Provincial Park, says he’s never heard of an injury or fatality on the Robson River in the three decades he’s been around, but people do assume a certain amount of risk when they go into the back country. A young woman was killed in May 2013 when she fell into Swift Current Creek, which also flows into the Fraser River just a few kilometers from the Robson River.

Scheller asks her oldest son “So what did you learn from it?”

“Don’t get impatient!” is Aubrey’s first response. And stay on the main trail, and look out for each other.

Scheller checked her phone afterwards, which was in her backpack and it still worked, though her “waterproof” watch is foggy. She also bought some lotto tickets, thinking if she’s lucky enough to get out of the Robson River alive, she might be lucky at the lotto, but her tickets this week didn’t win.

“I know God was watching out for me that day and I am so thankful for that tree catching me,” says Scheller.

Kirby comes and gives his mom a hug, but he doesn’t want to say anything, or be in the photo. “You don’t want to talk about it right now?” Aubrey asks his younger brother. Kirby says no, but he agrees he’s happy Mom is here, and gives her another hug. 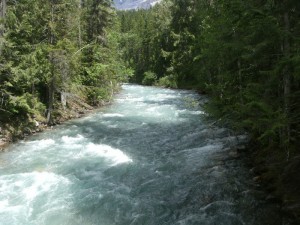