The lounge is dimly lit; I had just walked in after a long hike up the hill at the Terracana Ranch, between Small River and Tete Jaune. I had been visiting with several cyclists who had just come out of a sweat lodge, when the sky opened up and I was caught in the downpour. Needless to say I am dripping on the floor, my glasses are steamed up, and I’m sure I look like a drowned buffalo when a man a little older than myself with grey hair and an accent reminiscent of England with a touch of Scotch walks over and introduces himself. He takes no notice of my dripping and acts as if I were a long lost friend as he leads me to a table where another man by the name of Ben Davidson was sitting and begins to tell me of this adventure.

One day eight years ago after another gruelling charity ride, Nick Lees was taken by a friend to Mile 0 of the Yellowhead Hwy in Haida Gwaii. As Lees stood there looking at the mile zero marker, thinking about the charity ride he had completed the day before, his eyes wandered, taking in the scenery. His line of sight came to rest on a series of Totem Poles and “the penny dropped.” Lees turned to his friend and said “Let’s do a charity bike ride for kids with a totem pole.”

How do you do a charity ride with a totem pole?

In our interview Lees says friends encouraged him to finally make it happen. Lees, who has been a part of many charity bike rides, contacted Allan Mayer, Matt Decore, Osprey Resort, and cyclist Ron Pawloski last September, and things began to fall into place. They introduced Lees to Ben Davidson a traditional carver from Queen Charlotte Village who has been carving since he was 4 years old, having learned the carving craft at his father’s knee. Lees stated that when he met Davidson something just clicked. The deal was done on a handshake the day they met.

Fast forward eight years and the Haida Gwaii Totem Ride is a reality.

Davidson told me of an amazing child who touched his life. At this point Davidson’s eyes became distant and his voice caught as he explained how the meeting of Kaiya, a child diagnosed with terminal cancer, changed his life.

“It breaks your heart to hear a young child plan their own funeral,” said Davidson.

Kaiya spent 17 months at the Stollery Children’s Hospital and lost her fight with cancer last year. Now Davidson fights for her and the children who had, have, or will have cancer. Davidson smiles as he speaks of his wife and children and of how they support him in this and how precious they are to him.

Lees and Davidson designed the totem pole together, each joking that the other was picky and that the designing took longer than the carving. Davidson said that the carving took him four months of more than full time work, with the help of four full-time helpers and another worker part time. Lees was adamant that an Eagle top the totem pole, to symbolize beauty, strength, and power. Davidson, creating this in Kaiya’s honour, wanted birds and butterflies, her personal favourites, along with the symbolism of love and protection depicted in mother bear with her cub. He wanted to respect those and where it was to be placed – so on the bottom of the totem pole is a bison.

And so this incredible work of art is being escorted by 36 bicycle riders from Mile Zero of the Yellowhead Highway all the way to Stollery Children’s Hospital in Edmonton Alberta, with a stop at Edmonton’s Churchill Square for Canada Day where they plan to announce the final total raised during the ride. (When I conducted this interview the total was just over $300,000). The Totem Pole 10 feet tall and weighs half a ton. It will be installed in the main atrium of Stollery Children’s Hospital (part of Edmonton’s University Hospital) when their current renovations are complete.

Lees made special note of the logo which Davidson had designed for the ride. Davidson called it a Butter Cycle to honour the riders, the children, and the beauty and strength in hope. It consists of two round flourishes for wheels and a curved slash for the frame of the bike – the body of the butterfly, and the traditional Native symbols for boy (facing left) and girl(facing right). It is eye catching in its own right. The meaning and the purity it shows make it not only beautiful to look at but also make it inspiring.

In fact it inspired one of the younger riders. Alex Webb has raised over $40,000 – more than anyone else – and has won two stages of the ride. What made this even more incredible is the fact that Webb is riding in the company of his father because he is only 13 years old. His younger sister Olivia asked all of her friends and family for money for her 10th birthday and then gave it all to Alex to help kick off his fundraising efforts. Webb said that he trained hard for this as the 1760K distance was nothing to take lightly. He commented that he would like to one day ride in the Tour de France.

Lees concluded the interview with a sparkle in his eyes and the hope that this would inspire someone else to create their own team, their own way to help people in the world. “Let’s have a beer and drink to it… we need to replace electrolytes you know,” he said with a wink. 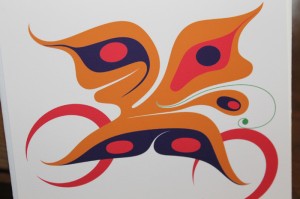