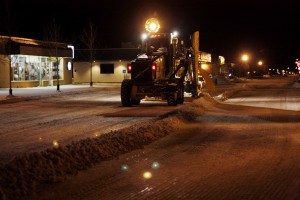 The Village of Valemount passed a policy at their regular Jan. 8th meeting that takes burden off Village staff and places more responsibility with business owners to clear downtown sidewalks.

Until this policy, it had been unclear what responsibilities lie with landlords. While Council voted in 2010 to amend the policy to transfer all responsibility of sidewalk snow removal to the Village, the policy was never actually changed.

“There’s this discrepancy between the council resolution and the policy – the resolution never made it into the policy,” says the Village Chief Administrative Officer Anne Yanciw.

Council requested last spring that a new draft policy be reviewed by residents including downtown tenants/landlords. The Chamber of Commerce was approached for members interested in assisting with this task. Patricia Thoni and Mike Simms volunteered and helped draft the policy.

The policy clarifies that the Village will pass once over downtown sidewalks before business hours when there is more than 3 in or 7.5 cm of snow. At all other times it is the tenant’s/landlord’s responsibility to ensure sidewalks remain clear of snow and ice. The policy stipulates that landlords must clear sidewalks by 10 a.m. on weekdays and within 24 hours on weekends.

“Sidewalks are expected to be kept to a condition to allow safe use by pedestrians. Handicapped ramps are to be kept to bare condition, or if impossible, then sanded,” the draft policy states. In addition, the “courtyard” area in front of the IGA will receive the same attention as the sidewalks.

Yanciw says on days when it is required, snow removal of sidewalks will begin with the first public works shift at 5 a.m. The clearing of streets, however, likely won’t begin until 7 a.m. when the rest of the public works crew arrives.

Peter Reimer, a 5th Ave landlord says it doesn’t make sense to pawn off snow removal on tenants, when so much was invested in the downtown revitalization.

In addition to the cost and nuisance to business owners, he is concerned about shopkeepers damaging the bricks by not using the appropriate snow and ice control methods.

“It’s about protecting our investment.”

He says when the revitalization was first pitched to residents, the Village assured him that landlords would not have to foot the bill for winter sidewalk maintenance.

“I think they should honour the agreement they made – for the good of our town,” he says.

A snow removal report to council notes that if the Village were to be responsible for 100 per cent of sidewalk maintenance it would cost an estimated $5,000/year and require an additional staff person.

5th Ave. tenant Sherral Shaw says she removes snow in front of her business regardless of the policy, but had questions about liability and wondered whether this affected other businesses’ willingness to remove snow and ice.

Like a bylaw, a policy can be enforced by the Village, Yanciw says. While it’s not written in the policy, she says if a landlord fails to clear the snow in front of their building, the village will clear it for them and send them a bill.

She says the Learning Centre has agreed to carry a list of people willing to clear snow and owners may choose to hire someone to clear the snow for them. Landlords of empty buildings will still be responsible for snow clearing.

Yanciw says if the Village takes on more snow removal, they would need to consider everything they have assigned the public works department already, including bylaw enforcement, garbage collection and Bigfoot Trail clearing.

“By the time you add up all these things, there is a staffing impact.”