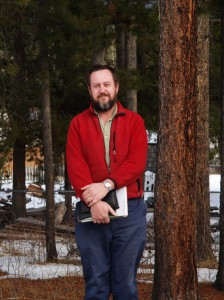 Do you ever wonder how that yummy smear of honey ended up on your toast or in your favourite tea? The Goat was lucky to get in touch with local beekeeper, Paul Fretts, who shared some interesting facts relating to the journey from beehive to consumer. He is scheduled to take delivery of 24 bee colonies this coming April and will set up locally.

Originally from Edmonton, Fretts worked as a project accountant and found it necessary to engage in something more physical on his off time. He had placed an ad in the newspaper offering his rototilling skills and, in so doing, befriended an elderly beekeeper of the area. As their friendship evolved, so did Fretts’ interest with bees.

“My friend was getting old and having a hard time with some of the physical work, so I started helping him and learning [about beekeeping],” he said.

This was surely a break from the everyday office setting and processing of numbers.

Contrary to what many of us might imagine, bees require much the same care as other livestock: water, protection from severe winds and temperature, and predators. It’s also crucial to ensure there is adequate room for all of the bees within their hive. Failure to perform proper care will not only put the bees at risk of becoming sick, but may also propel them to swarm and flee with many others (including the queen) in search of better nesting conditions. One very important part in deciding where to set a colony up is to make sure Willow trees are nearby. “They are the first plant to produce pollen, and the bees need this protein to feed their young and grow the workforce,” Fretts explained.

As Mother Nature would have it, the Peace River country of Alberta and BC is one of the best honey producing areas in the world due to heavy amounts of forage (plant leaves and stem material). Although Fretts does not anticipate yielding as much hard quantity of honey here in the valley, he remains hopeful and positive that production will be successful regardless of the fact that the valley’s icy cold winters pose a potential threat.

Perhaps one of the most popular questions for any beekeeper would be whether they get stung a lot. It turns out that a “smoker” (a nifty little tool that is designed to generate smoke from the smoldering of fuels such as grass) and a nice warm, sunny day may be enough to calm the lovely little insects and allow their keeper to work quickly but efficiently in the hive. Fretts admitted that his veil is undeniably the best defense in keeping the number of stings to a minimum.

He says much confusion lies within the packaging processes of honey. As such, it is very common for honey to be produced in Canada but shipped hundreds of miles away to be packaged.

“I laughed one day in Edmonton when I bought a package of Alfalfa honey in a large store; that honey had been produced less than 100 miles away and shipped in bulk to Australia where it was packaged and shipped back to pretty much the same place in Canada…what was the carbon footprint of that jar of honey?,” Fretts said.

Fretts is not selling his honey as of yet but hopes to have a crop to market in late summer or early fall and plans to set up at the local Farmer’s Markets. For those who are honey lovers like me, keep your eyes peeled; we’re in for a locally cultivated sweet treat!